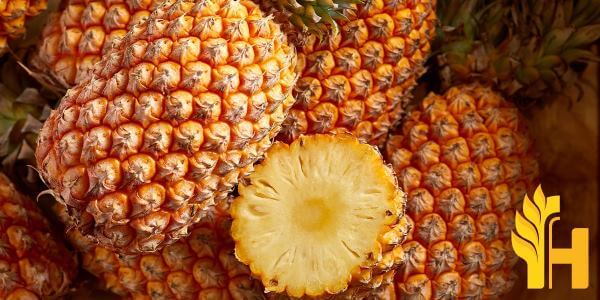 Where to buy and sell Pineapple, lowest (cheapest) and highest price.

The Current commodity price of Pineapple per kg, pound in the world in the global markets

Pineapples in Antigua and Barbuda

Pineapple is a fruit native to South America, most probably to Brazil and Paraguay. Native tribes of these regions popularized the fruit on the whole continent. Next, the fruit appeared in the Caribbean, Central America, and Mexico, where it was grown by the Maya and the Aztecs. Pineapple was discovered by Columbus in 1493 and brought to Spain by him.

Europeans proclaimed pineapple as a prestigious and luxurious fruit. It was available only for the richest and often eaten by the upper class and royals. First greenhouse cultivation began in England in the 18th century. Kazimierz Poniatowski tried to cultivate the fruit in Poland as well in the Frascati garden, Warsaw. Global imports of this fruit began in the 19th century.

The fruits are perishable, therefore, in order to survive the long journey, they are picked while still unripe. Nowadays they grow wild in Brazil. The largest producers are the Philippines, Thailand, Costa Rica, Indonesia, and China.

Pineapple comes from the bromeliads family, found mainly in the tropics. It has a fairly short stem, stiff, prickly leaves, and red-purple flowers. The characteristic fruit is a berry, which forms a shoot on the top, i.e. the leaf crown known to us. The largest specimens can weigh up to 5 kg.

It is a rich source of vitamin C and magnesium. Just 100 grams of sweet yellow flesh contains enough of both these elements to fulfill the daily dose of both. Additionally, the exotic fruit is rich in fiber that improves the functioning of the digestive system and helps to reduce hunger. Juicy pineapple contains a lot of water, so it effectively quenches thirst, and at the same time well hydrates and detoxifies the body..

However, the most important ingredient of the exotic representative of bromeliads is bromelain - a mixture of enzymes that, thanks to their anti-swelling and anti-inflammatory properties, support the immune system, relieve pain (e.g. joint pain), prevent blood clots, and even reduce fever. Bromelain has a positive effect on digestion, therefore pineapples are recommended for weight loss. Unfortunately, this substance is also the main cause of most allergic reactions caused by pineapples.

Pineapple is commonly referred to as an edible pineapple. It was cultivated in America long before the arrival of Columbus. However, most likely it is not true, this fruit came to Europe at the time of great geographical discoveries. Pineapple can be seen, for example, in one of the Amarna halls of the Cairo museum, where it appears as one of the votive items from the time of the pharaoh Akhenaten (1351-1334 BCE). This would mean that the fruit was known in the Mediterranean at that time. This fruit also appears in ancient Pompeii and on a mosaic dating back some 2,000 years that can be seen at the Museo Nationale Romano in Rome.

In the countries of the Spanish-speaking zone, it is called la pina, which means a cone. In Anglo-Saxon countries, pineapple is known as pineapple or pine apple. The original name - pineapple comes from the Guarani Indian language and means "very tasty fruit". For pre-Columbian people, it was a fruit that was part of their daily lives. They knew its medical properties, made alcohol from it, and even accompanied them on their last journey to eternity.

In the 18th century, pineapples grown in pots began to be decorations at the banquets of the aristocracy of that time. At that time, this fruit began to be associated with luxury, and only the upper class could enjoy it. Hence its popular name at that time - the royal fruit. The greenhouse cultivation of pineapples developed in England in the 18th century on a commercial scale, it was initiated in Poland by the brother of King Stanisław August. At the beginning of the nineteenth century, greenhouse cultivation ceased, pineapples began to be imported from countries where they grow naturally.

Nutritional and healing properties of pineapple:
1. It is rich in bromelain which belongs to the group of proteolytic enzymes. Bromelain has anti-edema and anti-inflammatory properties can be used in the treatment of post-traumatic edema and degenerative disease, and in the case of rheumatism.
2. Pineapple has lots of benefits for the cardiovascular system. It is rich in potassium which helps to stabilize blood pressure. Thanks to large amounts of vitamin C, it prevents the build-up of atherosclerotic plaques and keeps blood vessels in good condition.
3. It is one of a few fruits with a large content of manganese. This element is crucial for the well-being of the bones.
4. Vitamin C from pineapples is often used in cosmetics designed in improving skin conditions and neutralizing discolorations.
5. The fruit is a rich source of vitamins A, B1, B2, B6 as well as PP. It contains zinc, folic acid, phosphorus, copper, and iron.

Recent years have indicated significant growth in the world’s pineapple market. The production of this fruit has increased neatly 50% since 1998. According to data provided by FAO pineapple is the 11th most cultivated fruit in the world. Up to 24.8 million tons is produced yearly. The largest producer of this fruit is Costa Rica, followed by the Philippines, Brazil, and Thailand. Pineapple is usually produced by former banana producers, on the same plantations with similar activities.

Pineapple production has been increasing globally in recent years. In 2015, global production of pineapples was estimated at 17.9 million metric tons, up from 16.6 million metric tons in 2014. The majority of pineapple production takes place in tropical countries, with Thailand, Brazil, and the Philippines being among the leading producers. Pineapple is a popular fruit that is used in a variety of dishes and is also consumed on its own as a snack. Pineapple production has increased in recent years due to higher demand from consumers. Pineapples are a healthy fruit that contains vitamins and minerals, making them a popular choice for those looking for a nutritious snack. The sweetness of pineapples also makes them a popular choice for use in desserts and other sweet dishes. In addition to fresh pineapple, pineapple juice and canned pineapple are also popular products. The increased demand for pineapples has led to higher production levels in tropical countries where the fruit is grown. In 2015, Thailand was the leading producer of pineapples, with an estimated production level of 5.4 million metric tons. This was followed by Brazil (3.6 million metric tons) and the Philippines (2.7 million metric tons). Other leading pineapple-producing countries include Costa Rica, Nigeria, and Guatemala. Pineapples are versatile fruit that can be used in a variety of dishes. The most common way to consume pineapple is by eating it fresh, either on its own or as part of a fruit salad. Pineapple can also be used in savory dishes, such as stir-fries or curries. In addition, pineapple juice and canned pineapple are also popular products. The global production of pineapples is expected to continue to increase in the coming years as demand for fruit remains strong. This will likely lead to higher production levels in tropical countries where pineapple is grown. In addition, new pineapple-producing countries are expected to emerge as the popularity of the fruit continues to grow.