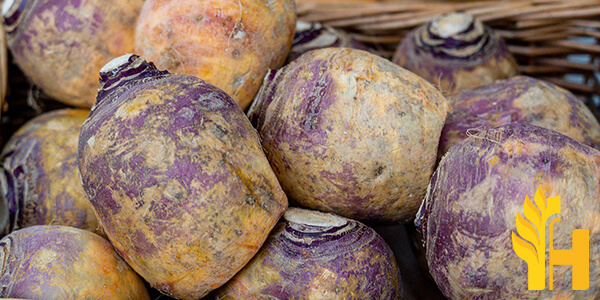 Where to buy and sell Rutabaga, lowest (cheapest) and highest price.

The Current commodity price of Rutabaga per kg, pound in the world in the global markets

Rutabaga known scientifically as Brassica napus or under the common names Swedish turnip, wax turnip, swede, or neep is a type of root vegetable that belongs to the Brassiceae family. It is commonly cultivated for its fleshy roots and edible leaves. It is believed to originate from mixing turnips and wild cabbage and is believed to be native to Russia or Scandinavia where it was cultivated for the first time in the late Middle Ages. Rutabaga is a great source of dietary fiber, vitamin C and minerals such as potassium. Its roots can be eaten raw or served cooked with other root vegetables. It is often served mashed in a form of puree. Its leaves are commonly cooked and served like other mustard greens.

The plant is a biennial. It creates large leaves that are coated with a waxy substance. It is characterized by its edible enlarged root that bears a distinct neck and has deeply marked leaf scars. The root consists of firm flesh. The roots are easily stored in winter. The varieties of white flesh vegetables have rough green skin and usually occur in irregular forms. The yellow-fleshed varieties usually appear in more regular shapes and are characterized by smooth green, purple, or bronze skin. During the second growing season, the plant produces a cross-shaped flower that has four petals often occurring in pale or bright yellowish-orange color.

It is a cool-season crop and is distinguished by its long growing season and quite slow growth, Rutabaga is cultivated as a late crop. It is quite commonly cultivated as a source of food for animals, especially as a cattle fodder crop.

Rutabagas are an excellent source of various important for the body minerals such as calcium, magnesium, and potassium and various vitamins, especially vitamin C and E. They also contain vitamin B, folate, and protein. It also contains small amounts of selenium and phosphorus.

The plant is mostly cultivated in Canada and Great Britain as well as many countries of northern Europe and, to a lesser extent, in the colder regions of the United States.

Rutabaga is a root vegetable that is popular in many parts of the world. It is a member of the brassica family, which also includes cabbage, broccoli, and cauliflower. Rutabaga has a number of health benefits and can be used in a variety of recipes. Global production of rutabaga was estimated at 18.7 million metric tons in 2013. The majority of rutabaga production takes place in Europe, with Russia, Poland, and Germany being the top producers. Other notable rutabaga-producing countries include the United States, Canada, China, and Japan. Rutabaga is a good source of nutrients such as fiber, vitamin C, and potassium. It also contains compounds that may help protect against cancer and other diseases. Rutabaga can be eaten raw, cooked, or roasted. It can be used in soups, stews, casseroles, and other dishes. Rutabaga is a versatile vegetable that can be enjoyed in many different ways. It is a good choice for those looking to add more nutritious foods to their diet.