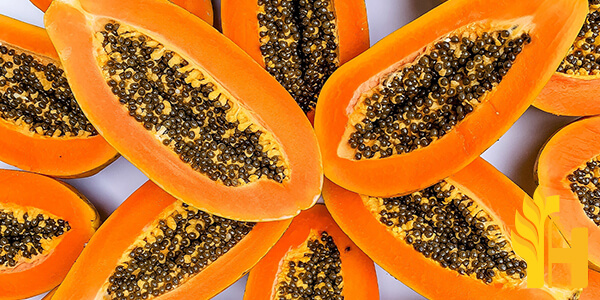 Where to buy and sell Papaya, lowest (cheapest) and highest price.

The Current commodity price of Papaya per kg, pound in the world in the global markets

Papaya is a succulent fruit plant that belongs to the Caricaceae family. It is also known under the common names papaw or pawpaw and the scientific name Carica papaya. It is believed to be native to Mexico and Central America and to be a fusion of a few other plants that also belong to the same family. Today papaya is widely cultivated in many regions of the tropical climate and in some warm regions of the subtropical climate. The plant is cultivated for its sweet musky fruits. The papaya fruit is a popular breakfast fruit in many countries and is widely used to prepare various dishes such as pies, sherbets, salads as well as beverages, juices, and cocktails. The unripe fruit can be also cooked like squash. Papaya is considered a tree. It has a palm-like trunk that reaches up to 8 meters in height. It is not woody. Its crown is made of tightly packed lobed leave that reaches up to 60 cm across. The leaves are borne on hollow petioles. It is a dioecious plant, which produces male and female flowers that are borne on separate plants. The female flowers are significantly larger than the male ones which are usually borne in clusters. The flowers turn into spherical or cylindrical fruits that reach up to 50 cm in length and can weigh up to 11.5 kg each. The fruit is characterized by its juicy flesh whose color varies from yellow to salmon-orange. The fruit flesh covers numerous small, round, and wrinkly black seeds. The unripe fruit consists of white milky juice known as papain which is used in the preparation of various medicines as well as in the manufacture of meat tenderizers. The papaya plant is usually grown from seeds. It develops quickly and the first fruits are produced before the end of the first years after planting. A single plant may live up to more than 5 years. The papaya crops around the world were nearly completely wiped out by the virus known as papaya ringspot. To save cultivations of this plant a genetically modified variety known as the Rainbow papaya has been developed. The modified papaya is resistant to the virus. Nowadays the majority of exported fruits are GMO crops. The largest production of papaya takes place in India with almost 5699000 metric tonnes produced every year. India is followed by Brazil (1424650 metric tonnes) and Mexico (951922 metric tonnes).

Papaya is a tropical fruit that is believed to have originated in Central America. It is now grown in many parts of the world, including South America, Africa, and Southeast Asia. Papaya production has seen a significant increase in recent years, with fruit becoming more popular as a health food. Papayas are a rich source of vitamins and minerals, including vitamin C, vitamin A, potassium, and magnesium. They are also a good source of fiber and protein. Papayas have been shown to have various health benefits, such as aiding digestion, boosting immunity, and helping to prevent cancer. The majority of papaya production takes place in Brazil, followed by India, Indonesia, and Thailand. Brazil is the largest exporter of papaya, while the United States is the largest importer. Papayas are typically harvested when they are ripe and then eaten fresh. They can also be made into juice, puree, or jam. Papayas can also be used in savory dishes, such as curries and stews. Papaya production is expected to continue to increase in the coming years as the fruit becomes more popular around the world. This will help to provide people with access to a healthy and nutritious food source.