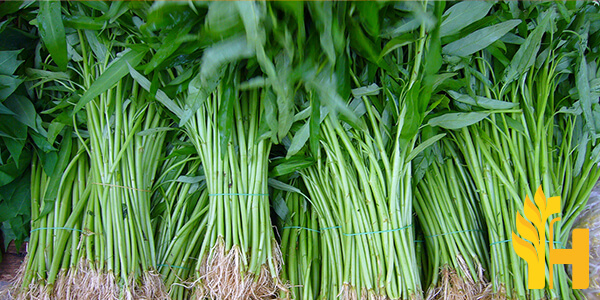 Where to buy and sell Water Spinach, lowest (cheapest) and highest price.

The Current commodity price of Water Spinach per kg, pound in the world in the global markets

Water spinach is a long, leafy green vegetable with hollow stems that grow in water or damp soil. It goes by the name of ong Choy in Cantonese or kōng xīn cài (空心菜) in Mandarin, which translates to “hollow heart vegetable.” In Malaysia and Indonesia, it is also known as kangkung. The hollow stems of water spinach are normally eaten as a vegetable because they have a crunchy texture similar to that of the bamboo shoot. The leaves on the other hand are used as herbs in soups or broth-based stews such as hot and sour soup or mussamun curry. The best thing about water spinach is that it grows very quickly, especially in warm and humid climates. It thrives well in nutrient-rich soil but only requires a small amount of fertilizer because it absorbs most of the nutrients from the surrounding water or soil itself. Water spinach plants generally reach a height of 4 to 5 feet tall but this can be trimmed periodically to maintain the desired height so that it does not block out sunlight from other plants. Water spinach is commonly consumed in countries such as Malaysia, Indonesia, Singapore, and Thailand because of its freshness and versatility. The hollow stems are crunchy while the leaves have a sharp peppery taste that goes well with rice dishes. The leaves are also used as a wrap for rice and meat, much like the way we use lettuce to wrap sandwiches at home or in school. The hollow stems of water spinach contain lots of vitamin A and C that are good for our eyes and immune system respectively. It helps reduce cholesterol levels and regulates blood sugar levels as well. Water spinach is also rich in iron, potassium, manganese, magnesium, niacin, and copper. It is also a good source of antioxidants like quercetin and beta-carotene. Though water spinach is an excellent source of nutrients, I’m not suggesting that it should be consumed in large quantities because it can cause inflammation, allergies, or even toxicity. The leaves contain a glycoside called oxalate which can accumulate in our kidneys and affect their function. If you have any existing risk factors for kidney stones, it would be best to avoid eating too much water spinach or consult your physician if necessary. Water spinach has been used as a fresh ingredient in soups and rice dishes for a long time in those countries. I have yet to see it being sold as a fresh vegetable in local supermarkets but you can easily grow your own by simply inserting some cuttings of the plant into water or damp soil near your house. In fact, if you manage to grow enough of these plants, you might just be able to sell some of them to local markets.

Water spinach is a tropical plant that thrives in hot, humid climates. It is widely cultivated in Asia, Africa, and South America for its edible leaves and stems. Water spinach is a good source of vitamins A and C, as well as iron and calcium. In Asia, water spinach is commonly stir-fried with garlic, ginger, and chili peppers. It can also be boiled or steamed and served with a variety of sauces. In Africa, water spinach is often cooked with tomatoes and onions. In South America, it is commonly used in soups and stews. Water spinach is a fast-growing plant that can be harvested just 50 days after planting. It is a popular crop among small-scale farmers as it requires little input and is tolerant of poor growing conditions. Global production of water spinach was estimated at 3.7 million tons in 2013. China is the largest producer, accounting for over half of the world's total. Other major producers include India, Bangladesh, Vietnam, and Thailand.