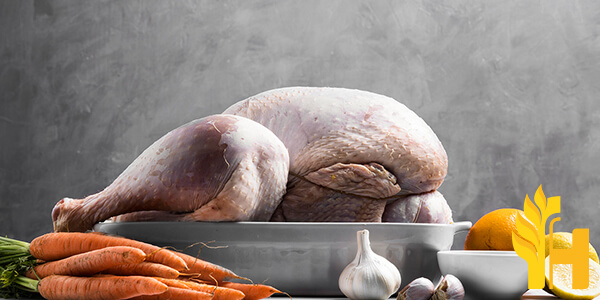 Where to buy and sell Turkey, lowest (cheapest) and highest price.

The Current commodity price of Turkey per kg, pound in the world in the global markets

The wild turkey is a large ground-dwelling bird that is 36-44 inches in length. It has a large, fan-shaped tail; long, stocky pink or gray legs; short, rounded wings; a bare head and neck, and a small, down curving bill. The wild turkey displays sexual dimorphism as males are about 25% larger in size than females. Males weigh 10-18 pounds, while female weighs 6-12 pounds. The male tends to have a dark, iridescent plumage with bronze and green highlights. His head is bare but his face displays caruncles or fleshy red wattles. A beard of modified feathers hangs from his breast. The female has duller brown feathers. Her plumage becomes spangled in the spring when she molts into a duller version of the male's plumage. The wild turkey can run at speeds up to 25 mph and fly at speeds up to 55 mph. However, these birds prefer to be on the ground where they enjoy feeding on seeds, acorns, berries, leaves, and insects. In addition, they will eat snails and slugs, frogs, and salamanders. Adult turkeys have very few predators in the wild, due to their size, speed, and sharp senses. Animals that prey upon turkeys are large hawks, eagles, or owls. Wild turkeys are commonly found in open fields with scattered trees around the area. They choose habitats where they are protected from predators, have an available food source, and are able to find open space for mating. Wild turkey mating displays begin with the adult males gobbling loudly to attract females. Males will strut around with tails fanned out in what is called a "strutting display." During this time, they also engage in head bobbing, drooping their wings, and dragging or scratching their chest on the ground. In addition, they produce a low-frequency drumming sound by vibrating special air sacs in their chests with great force. The female can only be fertilized for 12 to 24 hours after mating, so coupling is intense during this period. The female turkey lays 10-12 eggs and incubates them for 28 days. The chicks hatch with no down, eyes shut, and with a sharp upper bill; these features give the appearance of a miniature version of the adult turkey. The mother may leave her newly hatched chicks in search of food or if too many predators are nearby. Although turkeys have good vision and hearing, their sense of smell is poor. The lifespan for wild turkeys is around 12 years in the wild and can be up to 20 years in captivity. A typical adult turkey will eat 1-2 pounds of food every day and drink 5-7 gallons of water a day. They live on open grassland, pastures, and open forests. They prefer to eat seeds, acorns, berries, leaves, insects, and snails. The turkeys have a keen sense of smell but a poor sense of sight and hearing.