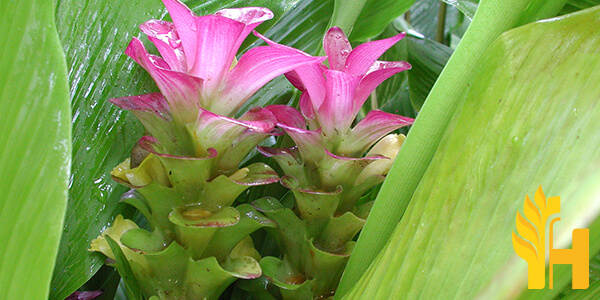 Where to buy and sell Tumeric Flower, lowest (cheapest) and highest price.

Turmeric (Curcuma longa) is a perennial herbaceous plant of the ginger family (Zingiberaceae), the tuberous rhizomes, or underground stems, of which have been used from antiquity as a condiment, a textile dye, and medically as an aromatic stimulant. Native to southern India and Indonesia, turmeric is widely cultivated on the mainland and in the islands of the Indian Ocean.

The plant grows to about 1 m (3 feet) in height and is cultivated both in its native lands and elsewhere as a tropical ornamental; it is sometimes classified as a perennial, sometimes as an annual, depending upon climate and altitude. The leaves are dark green and glossy, lanceolate, 20 to 30 cm (8 to 12 inches) long, about 3 cm (1 inch) wide, with a winged petiole sheathing the stem.

Turmeric has been used for centuries as a condiment and is commonly found in curry powders. It produces an orange-yellow color when mixed with an alkali, as in the preparation of dye or curry, but when finely ground it yields a much finer color and is used to impart a yellow hue to mustard condiments, canned chicken broth, and other foods. In southern Asia, turmeric powder is often applied to cuts and bruises and may be mixed with lime juice for this purpose.

Turmeric is also used as a fabric dye for cloth or yarn, particularly in countries where it is grown. The root yields a yellow dye similar to that obtained from saffron (see crocus); however, turmeric produces a more muted shade and therefore is typically combined with other dyes. The pigment curcumin may constitute up to 5 percent of the dried powdered root. Turmeric has a woody, orange-yellow taproot and is sometimes cultivated as a garden ornamental for the contrast of its colorful foliage and yellow cup-shaped flowers. A variety is grown as a source of the culinary spice known as turmeric.

The coloring matter in turmeric is chiefly curcumin and related compounds. Turmeric is sometimes used in soap-making. The root of the plant yields a volatile oil, which consists largely of turmerone. Curcuma longa, also known as turmeric, is native to southern Asia but has been introduced into other regions including North America. Other species are grown for their medicinal properties. Among these is Curcuma zedoaria, which is valued in China and Japan as a stimulant to the flow of bile and urine; it contains the alkaloids curcumin, demethoxycurcmin, bisdemethoxycurcumin, and medicine. A number of other species are of lesser economic importance.

Production involves a boiling process, which is followed by exposure of the rhizomes to sunlight for five to seven days to dry. Then they are polished by hand rubbing or by rotation in a mounted drum. Dried rhizomes vary from about 2.5 to 7.5 cm (1 to 3 inches) in length. The spice is usually sold in ground form. Distillation yields 1.3 to 5.5 percent essential oil, the main components of which are turmerone and ar-turmerone. The coloring matter is curcumin, which is also an antioxidant.

Turmeric is a popular spice with a long history of use in Indian cooking. The spice is made from the dried, powdered root of the Curcuma longa plant and has a slightly bitter, earthy flavor. It is often used in curry powders and other spice blends and is also a key ingredient in many Indian dishes. Turmeric is a top producer of Curcuminoids, compounds with antioxidant and anti-inflammatory properties. These compounds are responsible for the spice's distinct yellow color. Curcumin, the most abundant Curcuminoid in turmeric, has been studied extensively for its potential health benefits. Turmeric is one of the world's most popular spices. It is produced in many countries, including India, China, and Thailand. Global production of turmeric was estimated to be around 1.6 million metric tons in 2016. The majority of the world's turmeric is used in the food industry as a spice or coloring agent. A small portion is used for medicinal purposes.