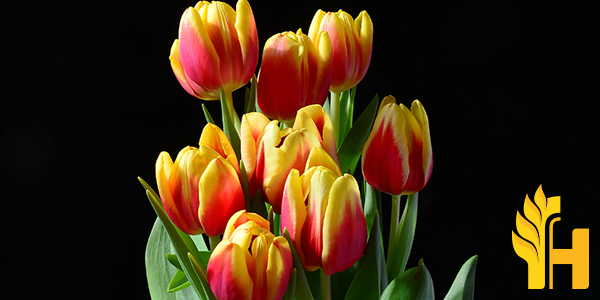 Where to buy and sell Tulip, lowest (cheapest) and highest price.

The Current commodity price of Tulip per kg, pound in the world in the global markets

The tulip produces two or three thick bluish-green leaves that are clustered at the base of the plant. The usually solitary bell-shaped flowers have three petals and three sepals. There are six free stamens, and the three-lobed ovary is terminated by a sessile three-lobed stigma. The fruit is a capsule with many seeds. Many garden tulips can be propagated only by their scaly bulbs.

Tulips are popular in Dutch society, especially because the flowers have three petals and three sepals that form an interlocking shape during blooming.

The most common wild form is dark red with yellowish-white or white borders; it gets its name Tulipa Krim (Crimea) from the Crimean Peninsula. The word tulip comes from a Turkish expression for the turban, as the turban-like shape of the blossom was thought to resemble that headdress. The first cultivated forms had flowers in yellow and red on plants growing only to about 10 cm (4 inches) tall; they were introduced into western Europe in 1554 by an ambassador from Sultan Suleiman the Magnificent. These early tulips, known as  türkīs, were followed by a variety of taller types.

In the 17th century, especially after 1634, when Charles I of England married Henrietta Maria, daughter of King Henry IV of France, who introduced many French fashions into England—including the wearing of rapiers and courtly behavior—the tulip became the most expensive of all flowers. It was grown in special gardens called tulip fields, which were often separated by small ditches or canals to provide water for the plants. Each bulb produced only one flower, but during the flowering season, an individual plant could produce several blossoms at once. The practice of cultivating rare varieties of tulips in special gardens was very popular, and single bulbs were sold for high prices.

The Netherlands is the world's leading producer of tulips, with a production of around 4 billion bulbs annually. Other major producers include France, Italy, Turkey, and the United States. The majority of tulips grown commercially are used for ornamental purposes, with only a small percentage used for food or other practical applications. The Dutch began growing tulips in the 16th century, and the flower became immensely popular in Holland. Tulip mania reached its peak in the early 1600s when bulbs were selling for extraordinarily high prices. The craze eventually subsided, but tulips remain an important part of Dutch culture and commerce. Today, most tulips are grown in greenhouses in order to ensure a consistent supply throughout the year. However, some tulips are still grown outdoors, and these tend to be the varieties that are used for cut flowers. The Netherlands exports tulips all over the world, and they are a popular choice for bouquets and other floral arrangements.