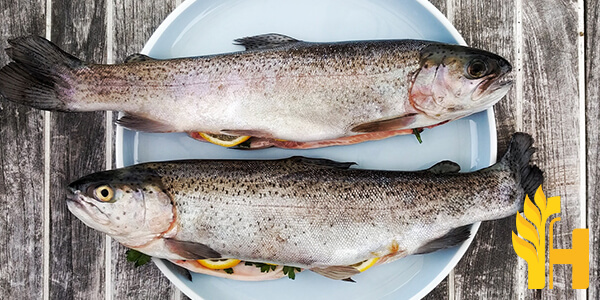 The current, latest prices of Trout in the world in the global markets

Trout are species of freshwater fish belonging to the genera Oncorhynchus, Salmo, and Salvelinus, all of the subfamily Salmoninae of the family Salmonidae. Trout are an important food source for humans and wildlife, including brown bears, birds of prey such as eagles, and other animals. They are classified as oily fish. In addition to the species listed above, several other members of the Salmonidae family have "trout" in their name (for example, salmon and char). Simply for clarity (and because there is no such thing as a "half-salmon"), this article will concern itself only with true trout. Trout are often referred to as "freshwater fish", but most trout are born in saltwater. Some exceptions are "landlocked" trout that were cut off from the ocean by natural events, such as the last ice age, and brook trout species that live in freshwater for their entire lives. Sea-run brown trout is an example of a sea-run species of trout that migrate into freshwater to spawn. Landlocked salmon and trout which live in freshwater for all or part of their lives are not a species of trout but belong to the separate genus Salmo. Trout are an important resource for humans worldwide, including areas where they are not native. They are commonly raised in fish farms and propagated through fish hatcheries; however, their ability to reproduce in the wild is limited by habitat fragmentation and other human-induced causes. Trout have fins entirely without spines, and all of them have an adipose fin along the back, near the tail. The pelvic fins sit well back on the body, on each side of the anus. The swim bladder is connected to the esophagus, allowing for gulping or rapid expulsion of air, a condition known as physostome. Unlike many other physostome fish, trout do not use their bladder as an auxiliary device for oxygen uptake, relying solely on their gills. There are many species, and even more populations, that are isolated from each other and morphologically different. However, with a few exceptions, trout adapt well to different environments and are ready to breed when they reach about three inches in length. In general, trout tend to become slimmer and more streamlined the larger they grow.