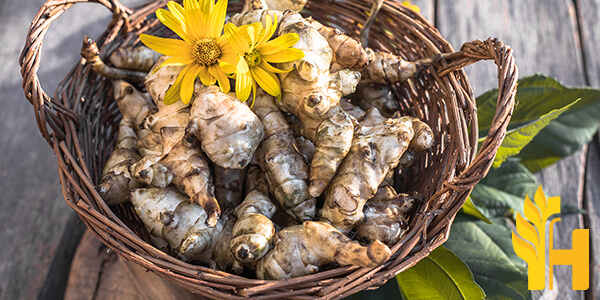 Where to buy and sell Topinambur, lowest (cheapest) and highest price.

The Current commodity price of Topinambur per kg, pound in the world in the global markets

The Jerusalem artichoke is a tuber with an apple-like flavor and is not related to the globe artichoke (Cynara scolymus). It is grown for its edible tubers and foliage. The leaves are lanceolate with upper leaves clasping the stem, 10 to 30 cm long and 2 to 5 cm broad, coarsely toothed or lobed, and deeply ribbed: they resemble wild chicory (Cichorium intybus).

Within the tubers of Jerusalem artichoke, storage carbohydrates are in the form of both starchy amylopectin and high molecular weight non-starch polysaccharides (NSP). The composition of NSP, soluble glucans (oligosaccharides with beta 1–4 linkages), and fructose oligosaccharides (mainly inulin) comprise about 4% of the weight of dry tuber. The carbohydrate composition varies depending on whether it is derived from sun or shade-grown tubers.

NSP is particularly resistant to human digestion and recent research has demonstrated potential prebiotic activity. The tuber is a good source of beta-carotene and phosphorus. The Jerusalem artichoke also contains the flavonol silymarin, which may have antioxidant activity in humans, and other polyphenols such as quercetin and rutin. In addition to carbohydrate content, Jerusalem artichoke tubers are a source of dietary fiber.

Jerusalem artichoke is especially high in fructooligosaccharides (FOS), making it a prebiotic, which increases the number of Bifidobacteria and Lactobacilli bacteria. Since these two types of bacteria help to boost the immune system, Jerusalem artichoke has potential health benefits for people with autoimmune diseases such as rheumatoid arthritis and multiple sclerosis. Jerusalem artichokes are also rich in potassium, magnesium, iron and phosphorus. Jerusalem artichokes can be included as part of a healthy diet for disease prevention.

Jerusalem artichoke is known for its tuber which can be eaten cooked or raw, but it is also used in livestock feedstock due to its high starch content. Here we describe some of the key issues that are debated in literature regarding Jerusalem artichoke's nutritional value and health benefits.

The edible tubers contain a carbohydrate-rich storage polysaccharide inulin. Inulin is a soluble fiber which can be considered prebiotic, promoting the growth of beneficial gut bacteria and improving overall digestion.

Topinambur, also known as Jerusalem artichoke, is a species of sunflower native to North America. It is cultivated for its tuber, which is used as a food crop. The plant is also grown for its ornamental value. The topinambur plant is a herbaceous perennial that grows to a height of 1-3 m. The leaves are lanceolate, 8-20 cm long, and 2-5 cm wide. They are arranged in a rosette at the base of the plant. The flowers are yellow, 5-10 cm in diameter, and borne on erect stems. The fruit is an achene, 3-4 mm long. The topinambur tuber is elongated, cylindrical, and up to 10 cm long. It has a thin, brown skin and a white, fleshy interior. The tubers are rich in carbohydrates, protein, and fiber. They are also a good source of vitamins C and B6, iron, potassium, and magnesium. Topinambur is native to North America, where it was first cultivated by Native Americans. It was introduced to Europe in the 17th century, and has since been grown in many parts of the world. The major producers of topinambur are China, Italy, and Peru. In China, topinambur is grown mainly in the provinces of Shandong, Hebei, and Henan. It is also cultivated in the autonomous region of Xinjiang. The main producing areas in Italy are the regions of Lombardy, Piedmont, and Emilia-Romagna. Peru is the largest producer of topinambur in South America. The topinambur plant is propagated by seeds or tubers. The seeds are sown in nurseries in the spring. The tubers are planted in the field in the summer. Harvesting of the tubers starts in the autumn and continues until early winter. Topinambur tubers can be eaten raw, cooked, or processed into flour. They can also be used as animal feed. The leaves and stems of the plant are used as fodder. The main use of topinambur is as a food crop. The tubers are eaten fresh, cooked, or processed into flour. They are also used to make alcohol and vinegar. In China, topinambur is used to make a type of alcohol called baijiu. Topinambur tubers can be stored for several months. They should be kept in a cool, dark place. There are many factors that contribute to the global production of topinambur. One of these is climate. Topinambur grows best in cool, moist climates with plenty of sunlight. This type of climate is found in many parts of the world, including Europe, North America, and Asia. Another important factor is soil quality. Topinambur requires rich, well-drained soil in order to grow well. This type of soil is found in many parts of the world as well.Finally, topinambur also requires a certain amount of space in order to grow properly. This means that it is typically grown in fields or gardens rather than in pots or containers. All of these factors contribute to the global production of topinambur.