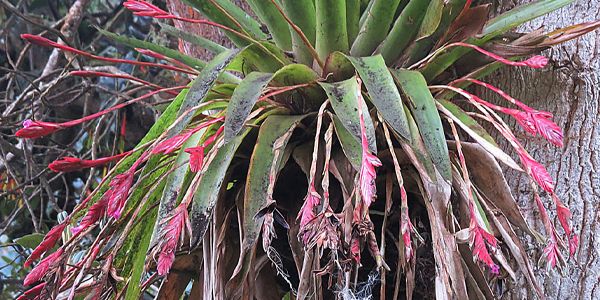 Where to buy and sell Tillandsia, lowest (cheapest) and highest price.

The Current commodity price of Tillandsia per kg, pound in the world in the global markets

Tillandsia is a genus of about 650 species in the family Bromeliaceae, native to the forests, mountains, and deserts of central and South America, the Caribbean, and the southern United States. Most tillandsias are epiphytes (air plants), meaning they grow on other plants or trees without being rooted in soil. A few tillandsia species are terrestrial, meaning they grow in soil. Tillandsias are known for their ability to thrive in environments with very little water and nutrients. They get the majority of their nutrition from the air around them, which is why they are often called "air plants." Tillandsia species can be found growing on power lines, trees, rocks, and even the sides of buildings. Tillandsias are relatively easy to care for and make great houseplants. They can be mounted on Driftwood, bark, or rocks. Or they can be placed in a glass terrarium. Tillandsias need bright, indirect light and good air circulation. They should be watered about once a week, and their leaves should be misted with water daily. Tillandsias are wonderful plants for anyone who wants to enjoy the beauty of nature without a lot of work. They make great houseplants and can even be used to decorate gardens and patios. With proper care, tillandsias can last for many years. So why not give them a try? You might be surprised at how easy they are to care for and how beautiful they can be. Tillandsia plants are very easy to cultivate and they make great houseplants. They can be grown in a pot or in the ground, and they don't require much care. Just be sure to keep them in a bright location and water them regularly. If you're growing tillandsia plants indoors, be sure to place them in a bright location. They do best in filtered sunlight or near a south-facing window. If you can't provide enough light, you may need to supplement with artificial lighting. Water your tillandsia plants regularly, making sure to soak the roots thoroughly. Allow the plant to dry out before watering again. These plants are native to tropical regions, so they prefer warm temperatures. If you live in a cooler climate, you may need to provide additional heat. Fertilize your tillandsia plants every few months with a balanced fertilizer. You can also use Tillandsia Food, which is specially formulated for these plants.