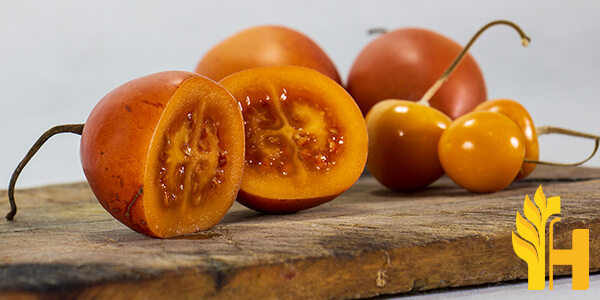 Where to buy and sell Tamarillo, lowest (cheapest) and highest price.

The Current commodity price of Tamarillo per kg, pound in the world in the global markets

Tamarillo trees are native to the Andes, where they grow at altitudes of between 1,000 and 4,500 meters. Found in South America since pre-Columbian times, the plant was brought to European botanical gardens by Spanish conquistadors around 1570. Today tamarillos are cultivated in many countries, from the United States to New Zealand, with South Africa being currently its most important producer. In summer, tamarillo trees bear small clusters of fragrant, white flowers. In autumn the purple-brown fruits grow up to six centimeters in length and one centimeter in width. The fruit is very fleshy and contains a lot of juice, and it is often said to be like a cross between a tomato and a kiwi fruit. This bright orange-red skin covers the firm, juicy flesh that is full of small brown seeds with an edible seed coat. Tamarillo trees grow best in subtropical or Mediterranean climates, but they can also thrive in cooler regions such as Norway. Planted in a pot, a tamarillo tree only takes up minimal floor space. There is evidence that you can even grow one in a bucket! If the plant is placed outside it will bear fruit just after its third year. In regions with cool or temperate climates, there might not be any fruit though, as the plant needs a warm period to mature fruits. The yellow variant has a different taste and appearance. Many other types have been developed over time that differs in shape, size, color, or texture. Because of their rich content in antioxidants and vitamins, tamarillos are often promoted as a healthy food. The fruit contains high levels of vitamin C, carotenoids including beta carotene, potassium, and fiber. Although the tree tomato has been cultivated for centuries, very little research is available on its nutritional value compared to other fruits. Some scientists have found that it helps slow down the absorption of sugar into the bloodstream. The beneficial effect on our blood sugar levels is probably due to its high content in potassium, as well as other antioxidants that have been found in previous studies. In any case, the tamarillo is a delicious and nutritious fruit to enjoy! In Peru, it has long been used as a healthy food for athletes or those doing manual labor. The tamarillo is a great source of energy and makes a perfect healthy treat at any time of the day. In South Africa, tamarillos are used for making pies, jams, breakfast juice drinks, desserts such as ice cream or pudding, and even vodka. In New Zealand, they are usually eaten fresh and in salads. Try a tamarillo smoothie with ice cream for dessert!

Tamarillo is a tropical fruit that is native to South America. It is also known as the tree tomato, and its scientific name is Solanum betaceum. The tamarillo is a small tree or shrub that can grow up to 6 meters in height. The fruit is oval in shape and typically measures between 2-5 centimeters in length. The skin of the tamarillo is thin and smooth, and its flesh is brightly colored, ranging from orange to red. The fruit has a tart, tangy flavor and contains numerous small seeds. Tamarillos are grown commercially in many tropical countries, including Ecuador, Peru, Chile, Bolivia, Colombia, and Brazil. The fruit is also cultivated in New Zealand, Australia, and Hawaii. In the United States, tamarillos are grown commercially in Florida and Puerto Rico. The majority of the world's tamarillo crop is used for processing and canning. The fruit is often made into jams, jellies, sauces, and purees. Tamarillos can also be eaten fresh, and are often used in salads or as a topping for ice cream or other desserts. The tamarillo is a nutritional powerhouse and is an excellent source of vitamins A and C, as well as potassium and iron. The fruit has numerous health benefits and has been shown to boost immunity, improve digestion, and promote heart health. Tamarillos are also a low-calorie food, making them an ideal choice for those watching their weight.