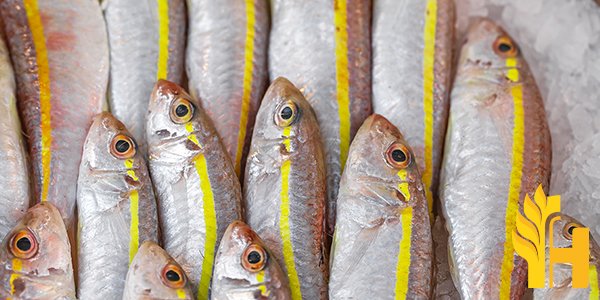 Where to buy and sell Striped Red Mullet, lowest (cheapest) and highest price.

The Current commodity price of Striped Red Mullet per kg, pound in the world in the global markets

The striped red mullet, Mullus surmuletus, is a member of the goatfish family, members of which are easily recognized by the pair of long chin barbels under the jaw. It has a moderately elongate body up to 40 cm in length. It has two well-separated dorsal fins and a forked tail. It has a large mouth with an upper jaw that extends back beyond the rear margin of the eye. The dorsal fin is blackish-brown and edged in white, while the caudal fin is orange to reddish. The striped red mullet occurs widely in the Indo-Pacific region from East Africa eastward to New Caledonia and Ducie Island, north to Japan, and south to northern Australia. It is common on the west coast of South Africa and has been recorded from as far south as Saldanha Bay. It has a depth range of 14 – 60 m but usually occurs at depths less than 20 m. This species is found in inshore waters where it lives on reefs and on sandy, seagrass or rubble bottoms. Spawning of this species occurs between January and May in the Western Indian Ocean off southeastern Africa. The striped red mullet is of minor commercial importance throughout its range. It is taken mainly by anglers as an excellent eating fish that makes good bait for larger game fish. The first dorsal fin has 8 spines and the second has 1 spine and 16 to 18 soft rays. The anal fin is similar in shape to but smaller than, the second dorsal fin with 2 spines and 13 to 15 soft rays. This fish can be found throughout the Mediterranean Sea where it occurs deep amongst rocks or in seagrass. It preys on invertebrates, which are detected by its sensory barbells. The striped red mullet is also known as the French mullet. Much of the catch is exported to France for human consumption. There it goes under the name rouget-barbet or rouget de roche (rock red mullet), and is of very good quality, but is usually caught as bycatch of other fisheries using nets or bottom trawls. Some of the catch is processed into fish meals for use as feed. The striped red mullet was eaten fresh in Ancient Greece, salted in Roman times, and dried in the Middle Ages for export to Italy. It is still exported to Spain where it is eaten dried. In French cuisine, it is eaten as a "maquereau", i.e., under the same name as the mackerel ("maquereau").