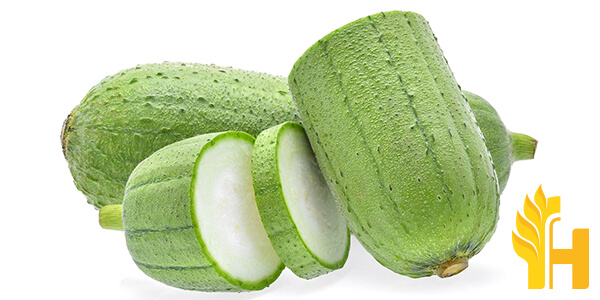 Where to buy and sell Sponge Gourd, lowest (cheapest) and highest price.

The Current commodity price of Sponge Gourd per kg, pound in the world in the global markets

The Sponge gourd is a cylindrical fruit that grows on a climbing, herbaceous vine. Sponge gourds are also called Luffa or loofah. The exterior of the fruit has conical protrusions and ridges with horizontal markings. The interior flesh of the Sponge gourd is smooth and creamy-white. Sponge gourd has a mild, zucchini-like sweet taste and a silky texture. Mature fruits are not tasty, being fibrous, bitter, and brown. Immature globular fruits can be eaten as vegetables or used as an ingredient in soup stock. Sponge gourd is usually produced in containers, but if they are to be grown on a trellis, provide support for the vines with garden twine at planting time. They should be watered regularly. If growing in containers, use potting soil that drains well because these plants do not like wet feet. Peel the fruit by hand, as a peeler does not work well. Harvest the gourds when they are young and tender. They can be eaten cooked or raw. Culinary use - sponge gourd is consumed in many different ways across the world. It has low caloric content but high volume due to its water content. It is usually fried, steamed, boiled, or roasted. It can also be stuffed with meats and vegetables or cooked in soup. Sponge gourds are used to produce soaps, shampoo bars, bath sponges, loofahs, and brushes by Western commercial manufacturers. They are often called dish scrubbers in the United States. Additionally, Sponge gourds can be used to make brooms and brushes for scrubbing pots. One of the most common uses of Loofahs is to exfoliate dead skin cells by using it with a body wash or soap. Sponge Gourd (Luffa cylindrica) is thought to help clear skin and treat conditions such as acne. In the Philippines, a popular snack is made from grilling or toasting a slice of Sponge gourd dipped in sugar. In Japan, an extract from the fruit has been used topically for burns and other external injuries. "Luffa operculata" is commonly known as the ridge gourd in the Philippines and is used in a popular dish, ginataan. Sponge gourd can be roasted and eaten as a snack or vegetable. They are very similar to zucchini when cooked and taste best fried or baked with other vegetables. The sponge gourd is a cylindrical fruit that grows on a climbing, herbaceous vine. Its exterior has conical protrusions and ridges with horizontal lines. The interior flesh is smooth, creamy-white, and has a sweet taste similar to zucchini. Mature fruits are not edible because they are tough, bitter, and brown. Immature fruit is used as a vegetable or in soup stock. The fruit is cultivated mainly for its fiber. Sponge gourd is a common vegetable in parts of India, Southeast Asia, and the Near East. Within Europe, it is occasionally found as a novelty on a dinner plate or in a fruit basket.

In 2017, the global production of sponge gourd was estimated at 7.3 million metric tons. The majority of sponge gourd production occurs in Asia, with India accounting for approximately 60% of the total output. Other major producers include China, Bangladesh, and Vietnam. Sponge gourd is typically consumed fresh, though it can also be processed into pickles, chutneys, and curries. The vegetable is a good source of vitamins A and C, as well as dietary fiber. The sponge gourd (Luffa cylindrica) is a cucurbitaceous vine native to tropical Asia. It is widely cultivated in many Asian countries for its edible fruit, which is used as a vegetable in various dishes. The plant is also grown commercially for the production of natural sponges. The sponge gourd is a tropical vine that requires warm temperatures and ample moisture to thrive. It can be grown in a variety of soil types but prefers well-drained, sandy loam soils. The plant is typically propagated from seed, though cuttings can also be used.