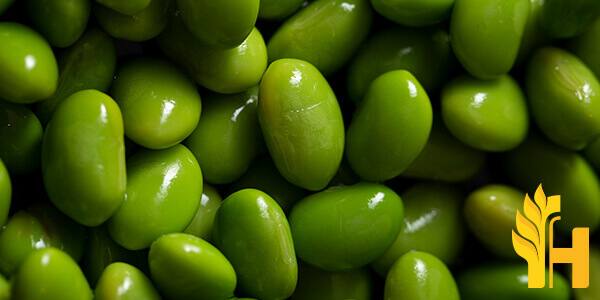 Where to buy and sell Soyabean Green (Edamame), lowest (cheapest) and highest price.

The Current commodity price of Soyabean Green (Edamame) per kg, pound in the world in the global markets

Edamame beans are whole, immature soybeans sometimes referred to as vegetable-type soybeans. They are green and differ in color from regular soybeans, which are typically light brown, tan, or beige. Edamame beans are often sold while still encased in their pods, which are not meant to be eaten. The typical edamame plant is an annual that averages 2 to 3 feet tall. Its green leaves are comprised of three leaflets that are each elongated ovals with pointed tips. Edamame pods resemble thick green beans, but they grow directly from the stems of the plant instead of dangling downwards. Immature soybeans inside the pods appear plump and white. Edamame beans are harvested while still immature. They are usually shelled from their pods, boiled in lightly salted water for 5 to 10 minutes, and then served warm with a sprinkle of salt. Edamame makes a popular health food because they contain many nutrients, including protein, fiber, iron, and calcium. In addition, they contain all of the essential amino acids and are a good source of omega-3 fatty acids. They also taste great as a simple snack or as part of a larger meal. Edamame beans are often served boiled in their pods for flavor. The shelled edamame can be eaten hot or cold. Shelled edamame beans can be a nutritious substitute in a variety of recipes. For example, they can be used in place of green peas when making vegan or vegetarian dishes, such as mashed potatoes and pea soup. Edamame beans can also add a nice boost to stir-fry, soups, salads, rice dishes, or casseroles. To prepare shelled edamame beans as a cold salad, combine them with fresh veggies and a flavorful vinaigrette before refrigerating until serving time. Edamame beans are typically sold frozen or pre-cooked in their pods to preserve their flavor. They can be found fresh but are rarely found at farmers' markets. Edamame beans are available at most grocery stores and can be found in the freezer section near other Asian foods, such as miso soup and edamame soy sauce. They are also frequently sold dried or roasted, but they will taste different from fresh or frozen edamame beans.

Soybean green (edamame) is a type of soybean that is harvested while still immature. It is popular in many East Asian cuisines and has become increasingly popular in the West in recent years. Global production of soybean green has been increasing steadily over the past few years, reaching a record high of over 10 million tonnes in 2016. The majority of soybean green is produced in China, which accounted for around 80% of the world's total in 2016. Other major producers include Japan, the United States, and Brazil. The increasing popularity of soybean green, both in Asia and the West, has driven up demand and prices in recent years. In China, the average price of soybean green more than doubled between 2012 and 2016. In the United States, prices have also been rising, albeit at a slower pace. The future outlook for global soybean green production looks positive, with both demand and prices expected to continue to rise in the coming years. This will provide a boost to the economies of the major producing countries, as well as to the soybean industry as a whole.