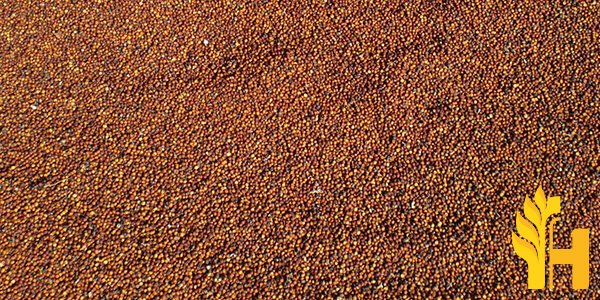 Where to buy and sell Sorghum, lowest (cheapest) and highest price.

The Current commodity price of Sorghum per kg, pound in the world in the global markets

The most important of the millets, sorghum is a tall annual cereal grass that grows to a height of about 2.5 meters (8 feet), with large panicles made up of crowded spikelets on branching stems. The grain is hard and opaque white when raw but becomes translucent when cooked. It has been used for human food since prehistoric times. The earliest domesticated sorghums were probably derived from the wild species S. bicolor (bicolour), or broomcorn millet, which is native to Africa and India. Sorghum grows well in poor soil, does not require much moisture, ripens early, and can withstand drought better than many other crops. There are many varieties of the crop, some with tall stalks and small heads, others with short stalks and large heads. The grain is eaten after roasting or boiling the seeds; it can also be ground into flour for porridge, flatbreads, and cakes. After roasting or toasting in a pan over an open flame, the seeds can be eaten as a snack. Sorghum may also be made into beer, whiskey, and sugar. Sorghum is grown in the tropics and subtropics around the world for food and fodder crops. The main area of production is Eastern and Southern Africa where it is used to make flour and porridge. It is also used to make beer in some parts of Africa and India. Sorghum is used as food for animals (particularly cattle) when they are young. In Australia, it is widely considered to be a productive fodder crop due to its high nutritional content and drought resistance. It is particularly popular among dairy farmers in the north of New South Wales (NSW) and Queensland. It is also the main ingredient in feedlot ration for beef cattle, with over 400,000 tonnes used annually in the state of NSW all year round. In India sorghum has been used since antiquity to make food dishes such as roti, bhakri, musallam, kheer, kadhi, and many more. In Australia sorghum is mainly used to make bread. It is roasted in a large rotating drum then milled into flour or coarse meal before being added to bread doughs or used in pastry fillings, biscuits, and cakes. Rice bran may also be mixed in to add color and flavor. Some commercial breeds contain sorghum flour and some specialty bread also includes a small percentage of whole grain. Sorghum is an important food crop in Africa, Asia, and the Americas. Because it thrives under diverse conditions and requires only a few fertilizing applications per year, it has become one of the major cereal crops of the world. There are many varieties, with different grain colors ranging from white, yellow, blue to red and purple, and different sizes and shapes. The grains cook quickly and have a pleasant flavor, making them suitable for many foods.

Sorghum is a cereal grain that is grown in many parts of the world. It is a drought-resistant crop that is well-suited to growing conditions in many arid and semi-arid regions. Sorghum is used for food, feed, and fuel purposes. Global production of sorghum has increased in recent years, due to rising demand from China and other countries. In 2017, global production of sorghum was estimated at 28.4 million metric tons. The majority of sorghum is grown in Africa, where it is a staple food crop. Sudan is the largest producer of sorghum, followed by Nigeria and Ethiopia. Sorghum is a versatile crop that can be used in many different ways. It is commonly ground into flour or made into porridge. Sorghum syrup, known as molasses, is also popular in many parts of the world. Sorghum straws can be used for animal feed or fuel. The rising demand for sorghum is due to its many uses and its adaptability to growing conditions in many parts of the world. Sorghum is a versatile crop that has many potential uses, making it an important crop for both food and fuel purposes.