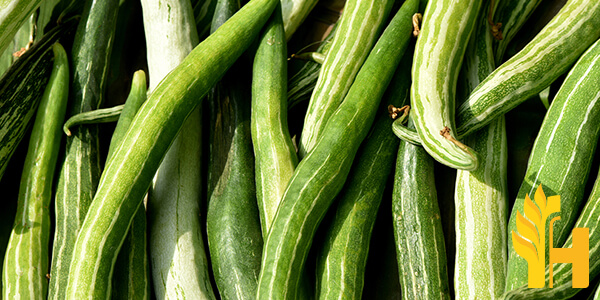 Where to buy and sell Snake Gourd, lowest (cheapest) and highest price.

The Current commodity price of Snake Gourd per kg, pound in the world in the global markets

Snake gourd is sometimes called serpent gourd and is the vernacular name for Trichosanthes cucumerina, one of about 75 species in the genus Trichosanthes (family Cucurbitaceae). It comes from Asia and thrives under tropical conditions in the Western Hemisphere. The plant itself is an annual vine, but in frost-free climates, it remains green all year and bears fruit continually. Snake gourd is grown mostly for its oddly shaped fruits, which are consumed while still immature. They are eaten cooked or raw in salads, soups, stews, stir-fries, and curries. The fruits are used in some cultures to flavor gin, and they yield a brown dye that is used in batik. Snake gourds range from 5 to 50 cm (2 to 20 inches) long and 2.5 to 15 cm (1 to 6 inches) wide. They resemble the fruit of the cucumber plant, although they are longer and narrower. They have smooth green skin with longitudinal stripes, which may vary in color from light to dark green. The flesh is white, crisp, somewhat juicy, and has a cucumber-like flavor. Snake gourds are eaten extensively in China, Indonesia, Malaysia, Thailand, Vietnam, India, and especially the Philippines, where a sweet, candy-like delicacy called turon is made from slices of snake gourd rolled in sesame seeds. In India, cooked slices are seasoned with salt, red chili powder, and cumin seed and eaten as a vegetable. The leaves of the plant may be cooked like spinach or used raw as a salad green. Snake gourd species are a source of a chemical called cucurbitacin, which is being used in cancer research because it inhibits cell growth and induces programmed cell death. The fruit pulp contains cucurbitacins I and II, which can cause stomach upset when consumed orally. However, these compounds have antioxidant activity when injected, and they are showing promise in preliminary studies for their antitumor effects. Snake gourd is also used to treat diseases of the kidneys, liver, heart, stomach, intestines, blood vessels, and bladder. The plant contains cucurbitacins that may possess anti-inflammatory properties. Early evidence suggests that extracts of the fruit may also stimulate the production of white blood cells, which are critical components of the immune system. Snake gourd is native to Asia and Africa, but it has spread throughout tropical regions worldwide. It grows in field margins, hedges, and grasslands on poor soils where it competes with crop plants for water. The seed is dispersed by birds and mammals that feed on the fleshy pulp. Snake gourd is an aggressive weed in many countries, including the United States. It was introduced from Asia as a vegetable but has escaped cultivation to become a dominant plant in some areas of Louisiana. In Australia, snake gourd vines grow up trees along watercourses and prevent the flow of water through the tree crowns during the dry season.

The snake gourd is a tropical plant that belongs to the cucurbitaceae family. It is a fast-growing, annual vine that can reach up to 20 feet in length. The plant is native to India and Sri Lanka, but it is now grown in many other tropical countries. The snake gourd gets its name from its long, slender, cucumber-like fruits which can grow up to 3 feet in length. The fruits have light green skin and white flesh. They are usually harvested when they are still immature and their seeds are not yet developed. The snake gourd is a popular vegetable in many Asian cuisines. It is often used in curries and stir-fries. The fruit can also be pickled or made into chutneys. Snake gourd is a good source of vitamins and minerals, including vitamin C, potassium, and magnesium. It also contains a compound called cucurbitacin, which has been shown to have anti-cancer properties. Snake gourd is relatively easy to grow. It can be started from seed or cuttings. The plant prefers warm, humid conditions and well-drained soil. It is important to keep the vine well watered, especially during the fruiting season. Fertilize the plant every few weeks with a balanced fertilizer. Snake gourds can be harvested after about two months. The fruits can be stored in the refrigerator for up to a week.