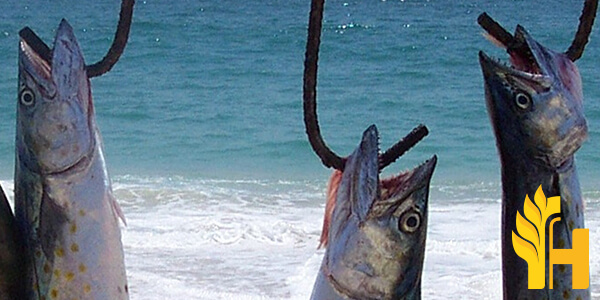 Where to buy and sell Sierra Pacific, lowest (cheapest) and highest price.

The Pacific sierra (Scomberomorus sierra) also known as the Mexican sierra, is a ray-finned bony fish in the family Scombridae, better known as the mackerel family. More specifically, this fish is a member of the tribe Scomberomorini, the Spanish mackerels. It occurs in the eastern Pacific Ocean from southern California to Antofagasta in Chile. The Spanish mackerel is a medium-sized fish that can grow up to 120 cm, but it usually doesn't exceed 65 cm. Its maximum weight reaches 8 kg. The coloration is very similar to that of other members of its genus. Its back is dark blue or green and the flanks are silvery with a golden tint; juveniles have about ten dark vertical bars. The belly and the inside of its mouth as well as its gill covers are bright red. The Spanish mackerel is an open water predator that lives in schools composed mainly of females, which move offshore from April to October, and aggregations of male individuals, which move towards the coast from September to December. During their offshore movement, males and pregnant or post-reproductive females may form mixed schools. It feeds on small pelagic fishes such as sardines, anchovies, and jack mackerels. This species is fished commercially for its tender flesh and the high omega-3 fatty acids content in its liver oil. It is also esteemed as a sporting fish when caught by a light fishing tackle from small boats or shoreline from rocks, beaches, or piers. It is sought out by anglers fishing off Southern California to Central Baja California, where it is abundant during the summer and early fall. The world record is 4.5 kg caught by James Drotar near Catalina Island, California on December 17, 2010. The Pacific sierra has been overfished off the coasts of North and Central America. Several governments (United States of America, Mexico, Canada) are trying to restore its stocks through fishing regulations and enforcement; nevertheless, the species is still at a low abundance level. The Pacific sierra has important economic value in Chile but also represents an opportunity for US landings as it rounds the corner of Baja California Sur on its way north up the west coast of Mexico.