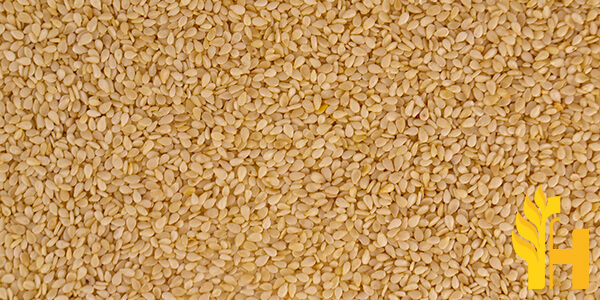 Where to buy and sell Sesame, lowest (cheapest) and highest price.

The Current commodity price of Sesame per kg, pound in the world in the global markets

Sesame is a flowering plant in the genus Sesamum, also called benne. The plant is native to Africa and India. It is cultivated for its edible seeds, which grow in pods or "buns". The tiny round seeds have a nutty flavour when roasted and are an ingredient in cuisines around the world. They are used as a topping for bread, cakes and confectionery, in pastries like the Middle Eastern sesame-seed candy called halvah, and in salad dressings.

Sesame is an annual herbaceous plant with numerous branches on the main stem growing erect to a height of 45-150 centimetres (18-59 in). It has alternately arranged pinnate leaves that are oblong-linear to lanceolate or ovate, 5-25 centimetres (2.0-9.8 in) long and 2–10 centimetres (0.79–3.93 in) wide with an acute apex and entire margin; the upper leaves are often stalked. The flowers are yellow, produced on the tips of the branches in clusters enclosed in a swollen ovary; flowering is from mid-spring to late summer.

Sesame produces pods with 2-8 seeds per pod, each seed about 1 centimetre (0.4 in) long and 5–10 millimetres (0.2–0.4 in) wide, which are harvested before they dry out and open to release the seeds by splitting lengthwise along the suture. The seeds can be milled whole or chopped for use in cooking; they impart a nutty flavour when roasted.

Sesame is widely grown in tropical and subtropical areas, being important to the diet of people living in those regions. It is an annual crop most commonly grown as a half-succeeding crop rotated with maize, teff or finger millet. The soil in which it is grown should be light or sandy loam, with a pH between 6.0 and 8.5, although good drainage is also important. The seed-bearing pods are best harvested when they reach full size but have not yet become dry and hard; if the seeds inside the pods are allowed to remain too long in contact with moisture in the fields or storage rooms, they can "sap the vitality of the plant". The seeds should be planted as soon as they are ripe since harvesting is difficult once they have become hard. They can be harvested by hand or with a combine; special "combination harvesters" cut and thresh the plants.

Sesame seed cultivation requires either one planting per year in regions with dry winters (southern Africa, north India) or two plantings a year in humid climates (West Africa, southeast India). The seed yield varies from around 3 to 6 tonnes per ha (2-4.5 tons/acre) depending on the variety and climate; global average yields are about 2.5 t/ha (1.8 tons/acre).

Sesame is a flowering plant in the genus Sesamum, also called benne. Numerous wild relatives occur in Africa and a smaller number in India. It is widely naturalized in tropical regions around the world and is cultivated for its edible seeds, which grow in pods. World production of sesame seeds was 6 million tonnes in 2013, with Tanzania, Myanmar, and India producing about 35% of the world's total. Sesame is one of the oldest oilseed crops known, domesticated well over 3000 years ago. Sesame has many species, most being wild and native to sub-Saharan Africa. Sesame indicum, the cultivated type, originated in India and is tolerant to drought-like conditions, growing where other crops fail. Sesame has one of the highest oil contents of any seed. With a rich nutty flavor, it is a common ingredient in cuisines across the world. While native to Africa and India, wild sesame can also be found growing in parts of Arabia, Thailand, and China. Sesame grows best in tropical and subtropical climates with long, hot growing seasons. The plant grows to a height of 50-100 cm (1.6-3.3 ft) and has an erect stem with hairy leaves and small white or pink flowers. Sesame seeds come in a variety of colors, depending on the variety, including white, yellow, black, and red. The most common type of sesame seed is the ivory-colored one, which is used in many cuisines. The black and red seeds are mostly used in China and Japan, respectively. Sesame seeds are small, oval-shaped seeds that have a nutty flavor and a high oil content. They are used in many cuisines around the world as a flavor enhancer or garnish. The seeds can be roasted and ground to make a paste, which is used as a condiment in some Asian cuisines. Sesame oil is also popular in Asian cooking and has a number of health benefits.