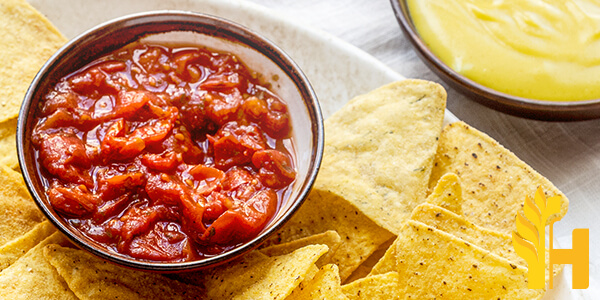 The current, latest prices of Salsa in the world in the global markets

Salsa is a sauce that consists of chopped vegetables and/or fruit, which are mashed together to create a mixture with a spicy flavor. It can be made from whole ingredients or developed from cooked ingredients, depending on the desired result. For example, mixtures of cooked vegetables may be mashed after cooking or they can also be eaten as is. Salsa is most commonly a mixture of blended chilies and aromatic herbs, such as cilantro. There are many varieties of salsa. Some types include Verde or green chili salsa, which includes tomatillos or green tomatoes, roasted green poblano pepper with onions and garlic; roja or red chili salsa, whose ingredients may include dried chilies, tomatoes, and tomatillo; and fruit salsa, which typically includes apples or mangoes. Salsa can be used as a dip for chips or as an ingredient in Mexican dishes such as tacos and burritos. The sauce is a food substance that accompanies food-other substances such as water or fat-in order to enhance or give flavor to the food. Sauces can be flavored or unflavored, hot or cold, prepared or raw, liquid or solid. The term sauce generally refers to a liquid mixture that can contain one ingredient such as tomatoes, which are cooked and strained of their juices, canned crushed tomatoes in puree form with liquid added, tomato paste, or any ingredient that imparts flavor to the dish. A sauce may also be an un-cooked mixture, such as a cold infusion of mushrooms in oil. Sauces may be cooked with ingredients such as meats and vegetables, made from stocks, wine, cider, stock cubes, commercially bottled sauces, or frozen concentrated pastes. The most common types are made from ingredients such as tomatoes, onions, fruits, mushrooms, shellfish, cheese, fish, oils, and herbs. Because of the temperature of salsas and condiments in general they can be classified into two different groups: cold and hot sauces. Cold sauces are usually uncooked and unprepared and include salads and salsa which is an uncooked mixture of fruits and vegetables, which is prepared in a blender. A hot sauce is a cooked preparation of ingredients such as chilies or other spices in a liquid base.