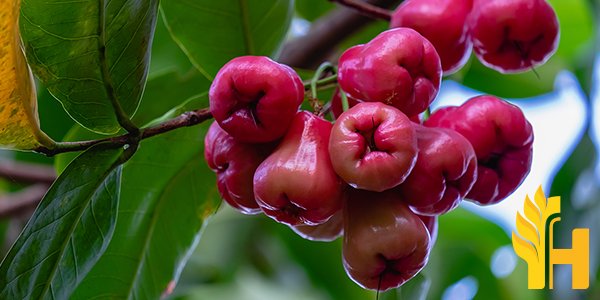 Where to buy and sell Rose Apple, lowest (cheapest) and highest price.

The Current commodity price of Rose Apple per kg, pound in the world in the global markets

The fruit of the classic variety of "Jambosa malaccensis" are roundish to sub-globose berries with pale-yellow skin, pink blush, and white flesh. The interior portion is about ten parts pulp to one part seeds. In the purple variety, the exterior of the fruit is a deep purple color. The flesh has a sweet flavor somewhat suggestive of orange and strawberry, with a trace of almond fragrance due to its high content of amygdalin. It is native to Malaysia and is grown extensively in tropical areas throughout the world. It ripens in the rainy season (June-August). This fruit is often eaten fresh, though "jambos" are also cooked with rice or used to make jam. The pulp may be cut into cubes and fermented for soft drinks. In Malaysia, the juice is bottled as a carbonated drink. It has been grown in home gardens in northern Australia since at least 1965, but no commercial planting has yet developed. The fruit is harvested after they have reached full size, but are still firm. To eat, the skin is peeled off and discarded. The fleshy interior is then scooped out with a spoon, the seeds being left in the bowl to avoid wasting any of it. The remaining seed-like substance can also be ingested, being known as "jambo seeds." Jambosa malaccensis is an evergreen tree, at least 10 m tall with a dense crown. The smooth bark has dark brown lenticels. The leaves are oval-lanceolate to oblanceolate, 8–20 cm by 3–8 cm, leathery, shiny green on the top surface and dull on the underside. They are attached to 2–5 cm petioles with glandular hairs and membranous margins which turn red at the start of the dry season. The white flowers have five petals and sepals. Stamens number about six, and anthers range from light brown to purplish-red. The tree flowers throughout the year. The jelly or jam is usually made with the above-mentioned purple-fleshed variety, but in some regions, both types are combined to make a pink product. The fruit may be dried in thin sheets and eaten like figs, ground into flour for breadmaking, or used to produce jelly or wine. Capped with the prominent, green, tough calyx, the fruit is nearly round, oval, or slightly pear-shaped, 1 1/2 to 2 in (4-5 cm) long, with smooth, thin, pale-yellow or whitish skin, sometimes pink-blushed, covering a crisp, mealy, dry to a juicy layer of yellowish flesh, sweet and resembling the scent of a rose in flavor.