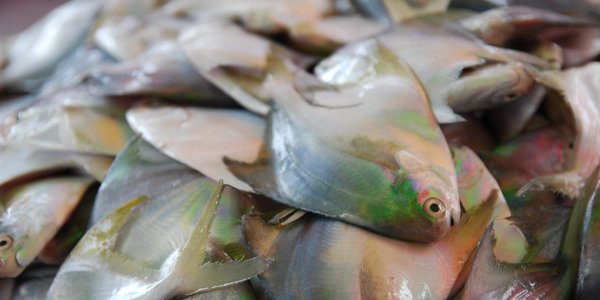 Where to buy and sell Red Pomfret, lowest (cheapest) and highest price.

The Current commodity price of Red Pomfret per kg, pound in the world in the global markets

Red pomfret fish are widely distributed in the tropical and subtropical waters of the Indo-Pacific region. They are an important commercial fish species and are highly prized in many Asian cultures. Red pomfret typically grow to a length of around 30 cm (12 in) but can reach up to 50 cm (20 in). The body is deep and compressed, with a small head and large eyes. The fins are red, as is the tail, which has a deeply forked shape. Red pomfret are carnivorous fish that feed on smaller fishes, crustaceans, and squid. They are typically found at depths of between 50 and 200 m (160 and 660 ft). Spawning takes place in the open water, with eggs and larvae being carried by currents. Red pomfret reach maturity at around 2 years of age. Global production of red pomfret is thought to be in the region of 300,000-400,000 tonnes per year. The majority of fish are caught in the wild, although there is a small but growing aquaculture industry in some countries. Red pomfret are popular food fish and are widely traded within Asia. They are often used in Chinese cuisine, where they are considered to be a delicacy.