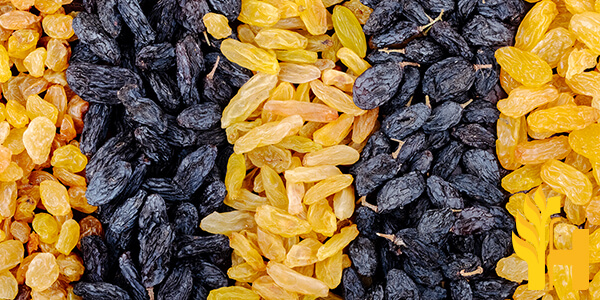 Where to buy and sell Raisin, lowest (cheapest) and highest price.

The Current commodity price of Raisin per kg, pound in the world in the global markets

Raisins are grapes that have been dehydrated or sun-dried. Raisins are chewy and sweet; they're often found in oatmeal cookies, granola, and other baked goods. The word raisin dates to the thirteenth century, from the Latin racemus (cluster of grapes or berries). Before you go and grab that box of raisins to top your oatmeal, you should know that raisins are essentially grape juice concentrate. They're fatty because the natural oils in grapes (which give them their distinct flavor) have been broken down into smaller components like glycerol and propylene glycol. They also contain more sugar than grapes because the sugar in grapes has crystallized after dehydration, making them about 90% sugar. To top it off, raisins are so dehydrated that they don't have much nutritional value left—they contain less vitamin C than fresh grapes, for instance. Raisins are made in one of two ways: either they are dehydrated naturally by the sun, or they have dehydrated artificially via forced hot air. The Sun-Maid company of California is famous for its raisins that are dried by letting them sit out in open boxes under the sun. To produce the most commercially available raisins, the grapes are first grown and harvested by machine and then laid out in the sun to dry for about seven days (although some varieties take as long as 14 days). During this process, the raisins are shaken or turned frequently to ensure even exposure to sunlight. Eventually, they are packaged up for sale. When making these artificially-dried raisins, the grapes are also harvested by machine and then washed, cooled, and dried in a heated facility. They are then injected with sulfur dioxide to preserve their color, which is otherwise lost in the drying process. While it's easy enough to find raisins on store shelves, you can also make them at home. This method usually takes only two days, as opposed to seven or 14 for commercially-produced raisins. It does require a little more attention, though. Simply place your grapes on a baking sheet and let them sit in the sun for one to two days, turning them occasionally so they dry evenly. If you're feeling industrious (and want better flavor), you can dehydrate your own grapes via forced air heat rather than the sun—or try out some of these other clever ways to use your dehydrator .

Raisin global production has seen a significant increase in recent years, due in large part to the popularity of raisins as a healthy snack food. According to the most recent data from the International Raisin Organization (IRO), raisin production totaled 1.3 million metric tons in 2016, up from 1.1 million metric tons in 2012. The vast majority of raisins produced globally come from California, which is responsible for around 80% of the world's supply. Turkey, Chile, and Iran are also major raisin-producing countries. Raisins are made by drying grapes, either in the sun or in special dehydrating machines. Thompson seedless grapes are the most commonly used type of grape for raisin production, although other varieties such as Muscat and Sultana can also be used. Raisins can be eaten on their own as a snack or used as an ingredient in a variety of recipes, including bread, cakes, cookies, and trail mix. The health benefits of raisins have made them a popular snack choice for people looking for a nutritious option. Raisins are a good source of fiber, vitamins, and minerals, and they contain no fat or cholesterol. Raisins can help to regulate blood sugar levels, and they have also been shown to have antioxidant properties.