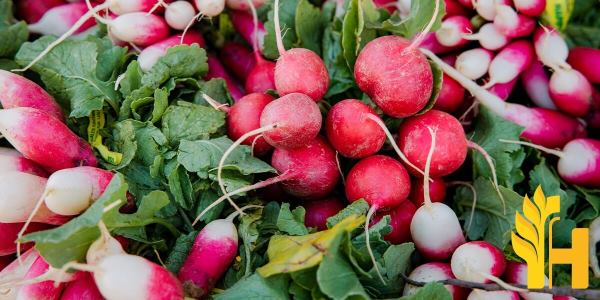 Where to buy and sell Radish, lowest (cheapest) and highest price.

The Current commodity price of Radish per kg, pound in the world in the global markets

The most common radish on the market is the variety characterized by its color. The most popular ones are white, yellow, pink, and purple of various shapes and sizes. Radish is usually eaten raw as an addition to sandwiches, cotton cheese, fresh salads, and as an ingredient of soups. It can also be boiled, stewed, or pickled. Radish leaves are also a perfect addition to many salads.

Radish was already known in the times of Egyptian pharaohs. It was fed to slaves who built the pyramids. It is believed that the stunted variety of common radish known today was bread by ancient Egyptian farmers. On the other hand, some researchers claim that the plant is native to China where it still can be found growing in the wild. The vegetable was known but Romans and Greeks but it was not cultivated back then. The first recordings of the cultivation are dated back to the 13th century in Germany. It was highly appreciated in the Middle Ages thanks to its health properties. It was used to treat radiculitis and rheumatic pains. The juice made of radish was used as a remedy for various colds and fevers.

The plant contains mustard oils (sulfur compounds) which are responsible for its characteristic spicy and sharp taste. It is a rich source of vitamins, especially vitamin C and B, potassium, calcium, phosphorus, iron, carbohydrates, and protein. It has beneficial effects on the urinary system. Thanks to the fiber it contains it improves digestion and eliminates constipation. It also helps to reduce flatulence. It beneficially affects the work of the liver and prevents gallstones formation. It should be avoided by people with peptic ulcer disease. It is sometimes treated as a natural antibiotic due to its bactericidal properties. It is highly recommended for people suffering from anemia. Radish helps to cleanse the body of toxins and it is said to be effective in relieving heartburn.

Radish, thanks to the sulfur compounds, has a positive effect on the condition of the nails and hair. It helps with preventing baldness, dandruff, and excessively oily scalp.

It is quite easy to cultivate because it is not a very demanding plant, that is why it is a favorite vegetable of many gardeners. It can even be cultivated at home: in a pot on a window sill or balcony. It has a relatively short growing season, so a ripe vegetable can be harvested after 406 weeks from the moment of sowing.

According to data provided by annual reports, up to 7 million tons are produced every year. The production of radish is mainly led by China, Japan, and South Korea. Radish production is believed to represent almost 2% of global vegetable production. Europe produces around 26000 tons of radish each year. The leading European producer is Germany followed by France, Italy, and the Netherlands.