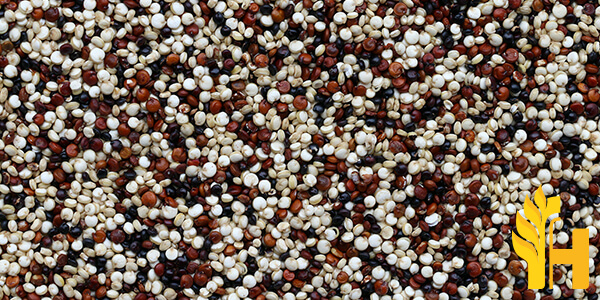 Where to buy and sell Quinoa, lowest (cheapest) and highest price.

Quinoa is a crop of considerable antiquity, having been harvested by the Andean civilizations for over 5,000 years. It was first domesticated in southern central Chile, probably between 3400 and 3200 BC. The Incas began to cultivate it more extensively about 2000 BC. The seeds are now an important food crop in many countries because they are gluten-free, high in protein, and contain all eight essential amino acids.

The leaves of quinoa are edible and taste similar to spinach, while the seeds can be used as a substitute for cereal grains such as rice or wheat. It is high in protein, an excellent source of manganese, magnesium, and iron. Quinoa is gluten-free and contains a number of phytochemicals and antioxidants. Quinoa was not produced in the United States until the early 1980s, but production has increased steadily to nearly 50 thousand acres. Quinoa is used as a cereal grain garnish, in soups and salads or ground into flour for baking. In recent years, it has been used in the manufacture of pasta and breakfast cereals, as well as snacks.

It is an annual herbaceous plant that can reach up to 3 meters (9.8 feet) in height, depending on the race. Its thick cylindrical stalk can be straight or branching and bears alternate leaves that range from lanceolate (tapering to a point) to roughly triangular. It is only one of the 11 species of the genus Chenopodium, but it is classified to be considered separate from other chenopods.

Quinoa grows best in areas with cool temperatures ranging between 12 °C (53.6 °F) and 36 °C (96.8 °F), suitable for growing at or above 2,400 meters (7,900 ft) above sea level. It is an extremely versatile plant that adapts easily to different climates and soil conditions, growing well in regions with poor soil fertility or limited water supplies.

Quinoa is an Andean grain crop that has been cultivated for its edible seeds. It is popular as healthy food and has recently gained attention as a trendy superfood. Quinoa was domesticated in the Andes thousands of years ago and today it's considered to be one of the most important cereal crops in South America. Over the past few years, quinoa has also gained popularity in North America and Europe.

Quinoa is a grain crop that is grown in many parts of the world, including the Andes region of South America. The grain is typically harvested by hand, and the seeds are then processed to remove the outer husk. quinoa global production The seeds are then cooked and eaten like rice or other grains. Quinoa has a high protein content and is also a good source of fiber and minerals. The grain is considered to be a superfood due to its nutritional value and has become increasingly popular in recent years. While quinoa is traditionally grown in the Andes region, it is now being cultivated in other parts of the world as well. In fact, quinoa global production has increased significantly in recent years, with the United States being one of the leading producers. In 2014, global quinoa production was estimated at about 216,000 metric tons. The top producers of quinoa include Bolivia (66,000 metric tons), Peru (36,000 metric tons), Chile (34,000 metric tons), and Ecuador (18,000 metric tons). The majority of quinoa production takes place in the Andean region of South America, where the crop is believed to have originated. Quinoa was first domesticated by the ancient Incas in present-day Peru and Bolivia. The Incas considered quinoa to be sacred and referred to it as the "mother of all grains." Today, quinoa is grown in many different parts of the world, including the United States, Canada, Europe, and Asia. In the United States, quinoa production is concentrated in the states of Colorado and California. The increasing popularity of quinoa has led to higher prices for the crop in recent years. In 2013, the price of quinoa more than tripled from the previous year. This increase in price has made quinoa unaffordable for many of the farmers who grow it. As quinoa becomes more popular, it is important to remember the people and places where this delicious grain comes from. When you purchase quinoa, make sure to buy from a fair trade company that supports small-scale farmers in the Andean region.