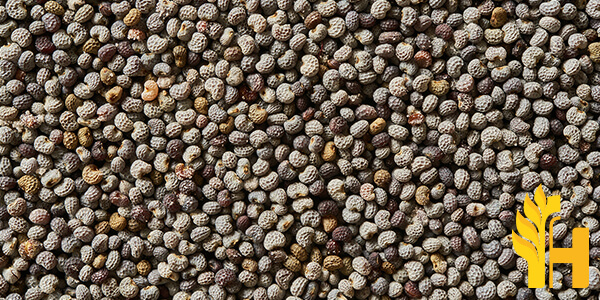 The current, latest prices of Poppy Seeds in the world in the global markets

The plant has lobed, or sometimes, dissected leaves, milky sap, and produce buds on solitary stalks, and flowers that consist of four to six petals and a large number of stamens that surround the ovary. The ovary turns into a spherical capsule with a disk top formed by the stigmas. The capsule is a cover for many small seeds that escape from pores beneath the disk when it is moved by the wind.

The unripe seeds of the poppy plant native to Turkey are a source of milky latex which is turned into opium. Opium is a substance that is used to derive papaverine, codeine, heroin, and morphine. Poppy is an annual plant well known for its handsome flowers that are quite wide and usually appear in pink, red, purple, or white color. The plant reaches up to 1.5 meters in height. The leaves are dark green with toothed edges. This variety of poppy is also grown for its ripe seeds as they are used for seasoning, oil production, and as bird seeds. Red-flowered and double strains flowers are also used as ornamental plants in gardens. There are many cultivars that are used for ornamental purposes.

The largest number of poppy plants that are commonly used as ornamental plants are native to western North America. At least 13 separate genera come from that region. Especially rich in native species in California. The best of them and widely cultivated is the California poppy, known scientifically as Eschscholzia California. It is an annual plant, characterized by its handsome, large flowers that usually are in orange-yellow color. This flower is commonly cultivated in India, Australia, and California.

There are many more species that are well known for their ornamental and fragrant flowers such as the Matilija poppy, the plume poppy, the snow poppy, or the flaming poppy. They are similar to each other but vary in terms of colors and flower sizes.