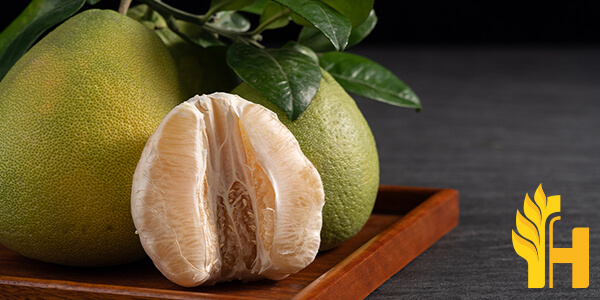 Where to buy and sell Pomelo, lowest (cheapest) and highest price.

The Current commodity price of Pomelo per kg, pound in the world in the global markets

Pomelo also spelled pummelo and commonly known under the name shaddock is a type of citrus tree that belongs to the Rutaceae family. It is very often cultivated for its edible, large, and sweet fruits of the same name. Pomelo is native to Southeast Asia and the Malaysian part of the island of Borneo. It was also introduced in West India. It is a very popular fruit in Asia where it is consumed raw or turned into various preservers such as candies, jam, marmalade, and more. Pummelo is one of the original citrus species which was a base to derive most commercial cultivars. For example, a grapefruit is a cross between sweet orange and pummelo.

Pummelo tree reaches up to 13 meters in height. It is characterized by evergreen leaves that are evergreen. The leaves have broadly winged leaf stems also known scientifically as petioles. They are downy on the surfaces so are the young shoots. The plant produces huge flowers that are white in color. The flowers turn into large round or spheroid, rarely pear-shaped, fruits that usually are lemon-yellow or green in color. The fruits are sweet and juicy. The pulp usually occurs in pink or pallid color and can be easily removed from the thick rind.

The fruit is an excellent source of many important nutrients and vitamins. It is extremely rich in vitamin C. The citrus fruit also contains thiamin, riboflavin, niacin, and vitamin B6. It is quite rich in minerals such as potassium, phosphorus, copper, iron, magnesium, zinc, manganese, and calcium. It is relatively low in calories which mostly come from the carbs it contains. Pummelo is also a good source of dietary fiber and protein. It also contains several different antioxidants, substances that are very good for the body as they help to reduce the amount of free radicals in the organism.