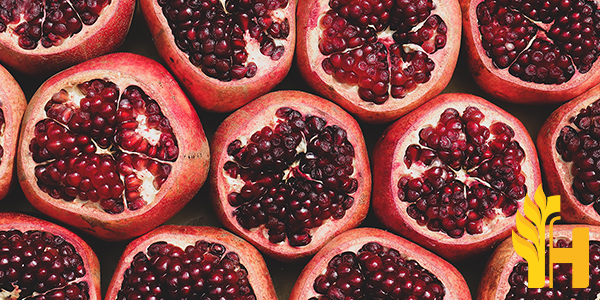 Where to buy and sell Pomegranate, lowest (cheapest) and highest price.

The Current commodity price of Pomegranate per kg, pound in the world in the global markets

Pomegranate is a type of shrub of a small tree that belongs to the Lythraceae family. Its fruit is also known under the same name. The fruit is quite popular for its juicy arils that are often eaten fresh. Pomegranate juice is the main source of grenadine syrup that is used commonly as a flavoring agent of liqueurs. Pomegranate is an excellent source of dietary fiber, vitamin C and K as well as folic acid.

The plant reaches up to 7 meters in height. It produces elliptic or lace-shaped, bright green leaves. The plant is well known for bright orange to red ancillary flowers that are borne close to the end of the branchlets. The flowers turn into fruits that are usually not larger than the fruits of the orange tree. They are six-sided and covered with leathery skin that usually appears in brownish yellow or red color. The inside of the fruit is divided into several chambers that contain large amounts of arils that are commonly red in color. They are juicy and each contains an angular elongated seed inside.

Pomegranates are believed to be native to Iran and neighboring countries, the largest cultivation takes place in the Mediterranean region, through the Arabian Peninsula, Afghanistan, and India. It is also quite a common fruit cultivated in the Americas in the warmer parts of the United States to Chile. The plant grows in a wide range of climates, the best quality fruits are produced in high temperatures and regions with dry atmospheres. Deep and heavy loams are the best type of soil for pomegranates cultivation.

The sweet arils of the fruit are a rich source of protein and natural fiber, as well as an excellent source of vitamins especially vitamin C and K. They also are a great source of minerals such as potassium and many beneficial substances known as antioxidants.

The global yearly production of this fruit reaches up to 3000000 metric tonnes. The largest producers of pomegranates are India, Iran, Turkey, the USA, and China. Up to 76% of the total global amount of this fruit is cultivated in these regions.

Pomegranate is a tropical fruit that is native to the Middle East and South Asia. The fruit is round or oval in shape and has thick, leathery skin. Inside the pomegranate, there are many small seeds surrounded by a juicy, red pulp. Pomegranate is a source of antioxidants and has been traditionally used for its medicinal properties. Pomegranate is grown in many countries around the world including Iran, India, China, Turkey, and Afghanistan. The fruit is also grown in the Mediterranean region and in some parts of South America. In 2016, the global production of pomegranate was estimated to be around 9.4 million metric tons. Iran is the largest producer of pomegranate, accounting for around 40% of the world's total production. India is the second largest producer, followed by China and Turkey. Pomegranate is a popular fruit and is consumed fresh or as juice. The fruit is also used in various traditional dishes and desserts in many cultures. Pomegranate juice is a popular ingredient in many cocktails and Mocktails. The fruit is also used in many cosmetics and skin care products because of its antioxidant properties.