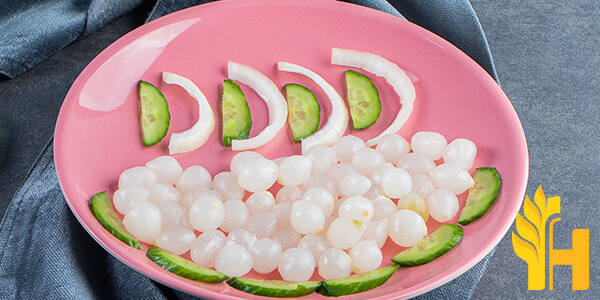 Where to buy and sell Pickled Onion, lowest (cheapest) and highest price.

The Current commodity price of Pickled Onion per kg, pound in the world in the global markets

Pickled onions are a food item consisting of onions (cultivars of allium cepa) pickled in a solution of vinegar and salt, often with other preservatives and flavorings. Pickled onions can vary in viscosity from one type to another depending on the preparation method, but they may have a "sauciness" that is at least as prominent as the sharpness from the acidity. Pickled onions are used as a condiment, such as in burger and sandwich recipes, where they add texture and flavor to the dish. They can be included with hors d'oeuvres, charcuterie, or antipasti dishes. Pickled onions are typically made with small white pickling onions, but other varieties of small onions may also be used. Typically, the brine solution is white vinegar that is typically 5% acetic acid. The onions are peeled and the root end trimmed off. The onions are then placed in a jar or container along with any seasonings desired, such as whole garlic cloves, peppercorns, or bay leaves. A pickling solution is made from vinegar and salt (and sugar if desired), to cover the onions. The jar is then covered with a lid and left to stand at room temperature for several days before use. Pickled onions are typically stored in the refrigerator. They can be stored unopened for several months. Once opened, they should be used within one week of opening. Pickled onions are used in dishes of various cultures that use pickling or fermenting methods, including Spanish tapas and Mexican cuisine, where they are often placed in dishes such as guacamole to reduce the strong odor of onions. Beyond their common uses in cuisine, pickled onions are also used for medicinal purposes. The pickling solution can be applied to skin infections like methicillin-resistant Staphylococcus aureus (MRSA) infections, which is an increasingly important problem due to widespread antibiotic resistance; it can also be used to treat infected diabetic ulcers.

The global production of pickled onions has increased significantly in recent years. This is due to the growing popularity of this type of food product, as well as the increasing demand from consumers. In 2017, the world production of pickled onions was estimated at 2.3 million tonnes, up from 1.9 million tonnes in 2013. The majority of this production takes place in China, which is responsible for around 60% of the total. Other major producers include India, the United States, and Mexico. The increasing popularity of pickled onions is due to their unique flavor and texture. They are often used as a condiment or side dish and can be added to a variety of recipes. Pickled onions are also a healthy option, as they are low in calories and fat. If you are interested in trying pickled onions, they are widely available in supermarkets and online. However, it is also possible to make your own at home. This can be done by soaking onions in vinegar or brine for several hours or days. Once they have been pickled, onions can be stored in the fridge for up to two months.