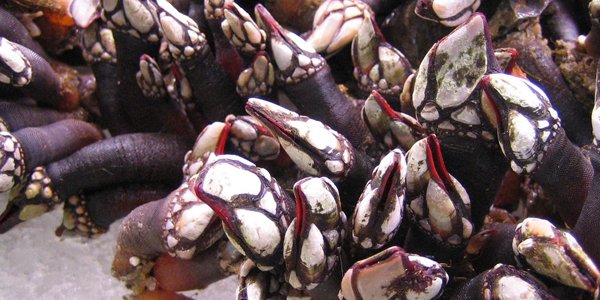 Where to buy and sell Percebes, lowest (cheapest) and highest price.

The Current commodity price of Percebes per kg, pound in the world in the global markets

Percebes (or gooseneck barnacles) are a type of edible marine invertebrate. They are cirripeds, meaning they have external shells and two pairs of joint legs. Percebes grow in rocky areas along the coast, attaching themselves to rocks or other hard surfaces with their strong "gooseneck" stalk. Percebes are a delicacy in many parts of the world and are most commonly consumed in Portugal, Spain, and China. The taste has been described as a cross between crab and shrimp, with a slightly chewy texture. The legs are typically the only part of the percebe that is eaten, as the body is small and contains little meat. Percebes are generally harvested by hand, which can be a dangerous task due to the rough sea conditions in which they grow. As a result, they can be quite expensive, costing up to $30 per pound in some markets. Percebes are a type of barnacle that is commonly eaten in Portugal and Spain. The Barnacles attach themselves to rocks in the ocean and can be harvested by hand. Percebes have a long, thin stalk with a small round head. The taste of percebes has been described as a cross between crab and lobster. Percebes are usually boiled or grilled before being eaten. The Barnacles can also be pickled or canned. Percebes are a delicacy and are often served as an appetizer or main course. When buying percebes, it is important to look for ones that are still alive. This can be checked by looking for Barnacles that are moving or by checking the expiration date on the package. Dead Barnacles can cause food poisoning. Percebes are a type of barnacle that is harvested for food. The majority of percebes are found in the coastal waters of Portugal, although they can also be found in other parts of Europe and the Mediterranean. Percebes have a long, tubular shape and a hard shell. They attach themselves to rocks or other hard surfaces in the ocean. When they are ready to harvest, percebes are hand-picked from these surfaces. Percebes are a popular seafood dish in Portugal. They are often served boiled or grilled. Percebes can also be found in some Spanish and Italian dishes. If you are interested in trying percebes, you may be able to find them at a seafood restaurant or market. You can also purchase frozen or canned percebes online.

The percebes global production is forecast to grow significantly in the next five years. This will be driven by increasing demand from Asia, particularly China and India. Global percebes production is currently estimated at around 10,000 tonnes per year, but this is expected to increase to 15,000-20,000 tonnes by 2025. This growth will be driven by a number of factors, including: - Increasing demand from Asia, particularly China and India.
- The expansion of percebes production in South America, Africa, and other parts of the world.
- The development of new technologies that allow for more efficient production of percebes.
- The increasing popularity of percebes as a delicacy and gourmet food item.

Percebes are a type of barnacle that is typically found attached to rocks in the intertidal zone. They are harvested for their edible "goose neck" which is considered a delicacy in many parts of the world. Percebes are commonly consumed in Spain, Portugal, China, and Japan. The global percebes market is currently valued at around $30 million, but this is expected to grow to $50-100 million by 2025. This growth will be driven by the increasing popularity of percebes as a delicacy, as well as the expansion of production in new markets such as South America, Africa, and Asia.