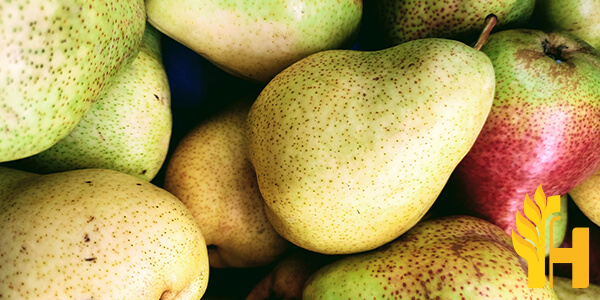 Where to buy and sell Pear, lowest (cheapest) and highest price.

The Current commodity price of Pear per kg, pound in the world in the global markets

Pear is a name of a genus that includes 45 species of shrubs and trees that belong to the Rosaceae family. The most common pear is Pyrus communis. It is one of the most important fruit trees in the world, commonly cultivated in all regions of the temperate climate. The fruit is quite important for the fruit industry and it is often consumed fresh or is canned. Some species of pears are also cultivated for their ornamental purposes.

The common tree is characterized by its broad head and reaches up to 13 meters. It has a long living span, as a single tree may live up to 75 years. It produces dark oval leathery leaves that are wedge-shaped at the base. The flowers appear almost about the same time as leaves and are up to 2.5 cm wide and usually white or pink-tinted. The flowers into fruits are sweet and have a quite soft texture with hard cells in the flesh. They are elongated, narrow at the stem, and broader at the opposite end.

Pear most probably originates from Europe and has been cultivated since ancient times. It was introduced in the Americas by European colonization. It was brought to Mexico and California by Mexican missionaries. The commonly and widely cultivated varities are Williams’ Bon Chrétien, Beurré Bosc, D’Anjou, and Winter Nelis. In Asian countries, the main produced varieties are local varieties of native species such as Asian, or Chinese, pear P. pyrifolia.

Some species of pear are considered invasive species and may easily escape cultivation areas. One of the most invasive species is the Callery pear as well as its other cultivars. The tree is susceptible to fire blight, anthracnose, canker, and powdery mildew.

Pears are quite important for the fruit industry. The world’s leading producer is China with 17 000 000 metric tonnes produced each year. China is followed by the United States (661340 metric tonnes), Argentina (595427 metric tonnes), and Turkey (530723 metric tonnes). Other significant producers of pears are Italy, South Africa, the Netherlands, Belgium, Spain, and India.

According to the Food and Agriculture Organization of the United Nations, global pear production in 2013 was 18.7 million tonnes, down 1.4% from 2012. The top five producing countries were China (58%), Italy (8%), the United States (6%), Argentina (6%), and Chile (5%). Pears are believed to have originated in China and there is evidence that they were cultivated there as early as 2000 BC. They are mentioned in Chinese literature as far back as the 10th century BC. From China, pears gradually spread to other parts of Asia and Europe. The word "pear" is thought to derive from the Old French word for the fruit, pire. The modern French word for pear, poire, is also thought to have come from the Old French word for the fruit. Pears are a popular fruit around the world and are grown in many different climates. In general, they prefer cooler climates and do not tolerate heat well. Pear trees are medium-sized trees that can reach a height of 20-30 feet (6-9 meters). They have smooth, gray bark, and their branches are covered in small, white flowers. The flowers are pollinated by bees and other insects. Pears are generally round or oval in shape and have a hard, woody core. The flesh of the pear is white, pink, or yellow and is surrounded by a thin skin that can be either green, red, or brown.