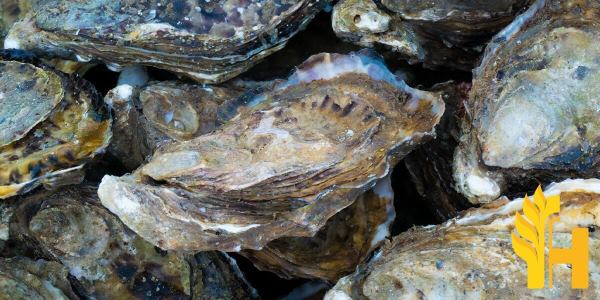 Where to buy and sell Oysters, lowest (cheapest) and highest price.

The edible oyster is a species of clam from the oyster family. It has a characteristic shell that reaches a length of 20 cm. The shape of the shell is oval or pear-shaped, and its color ranges from white, through beige, to yellow. Characteristic blue or brown lines appear on the upper surface of the bivalve. The interior of the edible oyster has a pearly color that shimmers in various shades in the light.

This species of oyster has been known to people since ancient times. Edible oysters are most abundant in the Atlantic Ocean, along the coasts of Europe. It can be found throughout the Mediterranean Sea, from the coast of Morocco to Norway. Due to the high concentration of this species on the European coasts, the edible oyster is commonly called the European oyster.

Edible oyster meat is appreciated by connoisseurs all over the world. It is served in the most exquisite restaurants around the world. Edible oysters are very juicy, and their meat is characterized by an excellent taste. Most often they are eaten raw, sprinkled with only a little lemon juice. Oysters also taste great when cooked. The most popular techniques are grilling, baking, and frying, but oysters can also be cooked. Oysters can be a main course because they are very satisfying. They can also be added to salads as they blend in perfectly with the taste of fresh vegetables.

Oysters are loved not only for their excellent taste. They are very healthy, and their meat is a rich source of valuable nutrients. They are rich in B vitamins and many elements necessary for proper functioning, such as selenium, fluorine, iron, zinc, and calcium. Edible oysters also contain large amounts of easily digestible protein.

One of the oldest forms of Aquaculture is undeniably oyster farming. It has indicated a growing tendency in recent years. The global aquaculture of oysters is dominated by China which is responsible for almost 86% of the total world’s oyster production. The growing demand for farmed oysters is a main factor of the recently increased production. In the EU, the largest producers of oysters are Spain, France, and Italy.

Oysters are an important food source for humans and have been farmed for centuries. Today, oyster farming is a multimillion-dollar industry, with operations in many parts of the world. Here's a look at the global production of oysters. The largest oyster-producing country in the world is China, which accounted for approximately 50 percent of the world's oyster production in 2013, according to the Food and Agriculture Organization of the United Nations (FAO). China is followed by Japan and the United States, which each produced about 5 percent of the world's oysters in 2013. Other major oyster-producing countries include South Korea, India, and France. Oysters are also farmed in many other countries around the world, including Australia, New Zealand, Chile, and the Philippines. The global production of oysters has been on the rise in recent years, reaching a total of 4.6 million metric tons in 2013. This is up from 3.8 million metric tons in 2010. The majority of the world's oysters are cultivated in saltwater environments, such as coastal bays and estuaries. Oysters are filter feeders, meaning they strain small particles from the water around them for food. As a result, they can help to improve water quality in their habitats. Oysters are also a popular delicacy and are often consumed raw, grilled, roasted, or baked. Oysters are a type of shellfish that is widely consumed around the world. oysters can be harvested from the wild or farmed in aquaculture operations. Wild oysters are often found in estuaries, where they filter plankton and other particles from the water to feed on. Oysters that are farmed in aquaculture operations are typically grown on submerged racks or in floating cages. Oysters are a popular food item, and their meat is often used in sushi and other dishes. Oyster farming is a growing industry, as aquaculture operations can provide a steady supply of oysters for the market. Oysters are also harvested for their pearls, which are used in jewelry. Global oyster production totaled 3.1 million metric tons in 2018, up from 2.9 million metric tons in 2017. China is the largest producer of oysters, accounting for over 50% of global production. Other major producing countries include Japan, Korea, and the United States. The oyster industry is facing some challenges, as wild oyster populations have declined in recent years due to overfishing and habitat loss. This has led to higher prices for oysters and has put pressure on the aquaculture industry to provide a reliable supply of oysters for the market. Looking forward, the global oyster industry is expected to continue growing, as demand for oysters is expected to increase. Aquaculture operations are anticipated to play a key role in meeting this demand, as they can provide a steady and reliable supply of oysters.