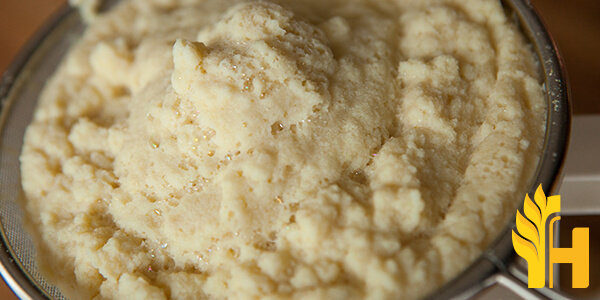 Where to buy and sell Okara Soy Pulp, lowest (cheapest) and highest price.

The Current commodity price of Okara Soy Pulp per kg, pound in the world in the global markets

Okara, soy pulp, or tofu dregs is a pulp consisting of insoluble parts of the soybean that remain after pureed soybeans are filtered in the production of soy milk and tofu. It is generally white or yellowish. It is part of the traditional cuisines of Japan, Korea, and China. Soy pulp is a good source of protein and dietary fiber. The fat content of okara is low and it contains no gluten, making it valuable for those on wheat-free or gluten-restricted diets. Okara has a mild, nutty flavor and can be used in recipes that call for other ground meats as an extender. Okara is used as a vegetarian meat substitute in recipes such as veggie burgers. If added to dishes, it must be cooked first to avoid giving the food a raw-pulp flavor and texture. When used as an extender for ground beef, its protein content can boost the protein content of the dish with little increase in fat. Okara is high in fiber and protein but low in fat. It contains about 31% dry matter whereof 32% is protein, 3% lipids, and 52% carbohydrates including 27% dietary fiber. Furthermore, okara has antioxidant activity. The use of enzyme preparations from the fungus Aspergillus oryzae for the hydrolysis of okara was patented in Japan.Okara contains soy isoflavones such as daidzein and genistein, but the level accounts for only 0.10–0.13% of dry weight. Although not nearly as well known in Western culture, okara can be used to make ice cream, burgers, and bread. It is often used in vegetarian cooking because of its high nutritive value. The taste has been described as slightly bitter or "beany". Okara is also sometimes eaten with miso soup like tofu. Okara production begins with whole dry soybeans (called "green soybeans" in the specialty food industry). These beans are first soaked to facilitate the removal of the bran and then boiled until soft. The skins are then removed. Most oil is removed from the beans by using a screw expeller, which uses steam to deliver a final "polishing" of the resulting product. This process produces a white steamed cake. The beans are then finely ground into a pulp, which is then filtered by using cheesecloth or other suitable material. The resulting product is okara. Before the invention of mechanical expellers, the green soybeans were squeezed by heavy stones to remove their oil.

The global production of okara (soy pulp) is estimated to be about 1.6 million metric tons in 2014. The majority of this okara is produced in Asia, with China and India being the top two producers. Other notable okara-producing countries include Brazil, the United States, and Japan. The production of okara has been increasing in recent years due to the growing demand for soy products. As a result, the price of okara has also been rising. In China, the average price of okara increased from about $200 per metric ton in 2013 to $400 per metric ton in 2014. The majority of okara is used as animal feed. However, it can also be used as a human food ingredient, as well as for industrial purposes. The production of okara is likely to continue to increase in the future as the demand for soy products grows. This will likely result in higher prices for okara.