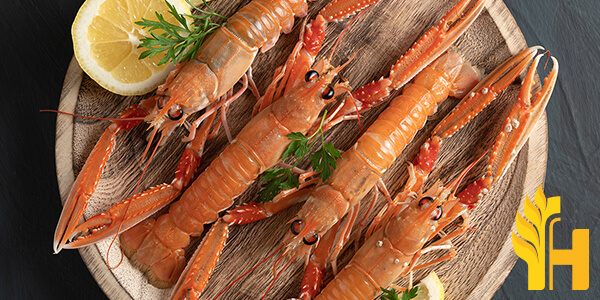 Where to buy and sell Norway Lobster, lowest (cheapest) and highest price.

The Current commodity price of Norway Lobster per kg, pound in the world in the global markets

The Norway lobster (Nephrops norvegicus) occurs in the Western Mediterranean Sea and the Northeast Atlantic from Morocco to Lofoten. Norway Lobsters are one of the most important species in commercial fisheries throughout Europe and also a popular food source. It is pale orange and is named after kidney-shaped eyes. Nephrops means “kidney eyes”. The shrimp-like creature protrudes from its chitinous armor with an elongated body, which can grow up to 20 cm in length. It has two pairs of antennae on the head, each containing more than 200 segments giving it the common name of Norway lobster. The first pair of antennae are used as olfactory organs and the second as tactile organs. It also has two smaller antennules between its eyes for detecting chemicals in the water. With its long body and spindly legs, it somewhat resembles a spider. This resemblance is increased by the presence of six jointed appendages on each of its thoracic legs. The two claws are used for catching prey, the smaller of which is usually kept tucked away under the body. It also has pincer-like organs at the ends of its antennae for picking up food. The smooth tail fin ends in a telson. The shell is divided into two segments, cephalothorax and abdomen; both can be covered by a pair of swollen plates further divided into several lobes or extensions, which give it the appearance of an astropecten, so it is also called sea star lobster. The Norway Lobster prefers rocky bottoms with plenty of crevices to hide in and can survive up to 45 years. It feeds at night on mollusks, crabs, and even small fish. The mating period takes place between September and October; the female releases pheromones to attract males. Females can carry up to 60,000 eggs and once they are fertilized, the larvae hatch after 10 to 13 weeks. After the first molt the tiny lobsters develop a carapace and after two more molts their antennas take on a claw-like appearance. Nephrops norvegicus is one of five species of lobsters found in European waters. The Norway Lobster is a crustacean and therefore belongs to the Malacostraca class, which contains approximately 7,000 species worldwide. The female can carry up to 7 million eggs at a time, which are fertilized externally by the male with stored sperm. The larvae develop in the sea for 8–12 months before they mature and settle on the seabed as juveniles. Once now found globally, now only occurs in Europe (Nordic seas).

According to the National Marine Fisheries Service, Norway lobster accounted for about 16 percent of global lobster production in 2013. The majority of this catch came from Canada (70 percent), followed by the United States (12 percent) and Mexico (8 percent). Other notable producers include Chile (3 percent), Norway (2 percent), and Australia (1 percent). Norway lobster is found in cold, deep waters off the coasts of Norway, Iceland, Greenland, and eastern Canada. They are typically caught using baited traps or pots. The lobster is then cooked and sold whole or as tails. Norway lobsters are highly prized for their tender meat and delicate flavor. In recent years, they have become increasingly popular in the United States, where they are often sold as a premium seafood item.