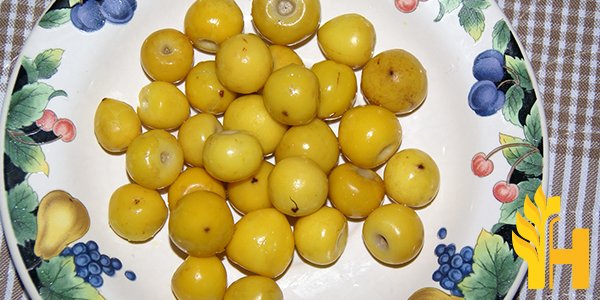 Nanche, or Craboo (Byrsonima crassifolia), is a flowering plant in the acerola family, Malpighiaceae, that is native to tropical America. It is valued for its small, sweet, yellow fruit, which is strongly scented. Nanche fruit is a small, round, and yellow to orange-red berry. The berries are sweet with a slightly acidic note. They have been described as smelling like raspberries or passionfruit. The tree reaches about 10 m in height and bears simple evergreen leaves that alternate on the stem and vary from ovate to elliptic. The midrib of the leaves is deeply sunken on the upper surface and raised slightly on the lower side. The tree produces tiny white flowers with a gentle, sweet fragrance that are arranged in clusters. The fruit develops from December to March in Colombia, but in other areas, it has been reported at various times in the year. Proceeding from the flower, the fruit develops in three parts. The central part is composed of a fleshy receptacle that holds the seeds and to which the sepals and petals are attached. Around this is a gelatinous envelope formed from modified petals; this surrounds an inner core made up of numerous carpels arranged in a spiral and covered by a thick skin that protects the fruit until it is ripe. The nanche tree is native to Central America, Colombia, Venezuela and northern South America. It typically grows in open woodlands near clearings or rivers at an altitude of between 300 m (1,000 ft) and 1,200 m (4,000 ft). "Byrsonima crassifolia" is named "chacunga" in Venezuela, "savanna serrette" in Trinidad and Tobago, "craupajou" in French Guiana, and "falsa nanche" in Colombia. In Costa Rica, the fruit has been used to make a jam with local honey. In addition, it is used to make juices and has been investigated as a potential source of antioxidants. The fruit can be made into a purée and then dried in the sun. The result is known as "nancite" and has an intense aroma similar to that of a banana. Nanche flowers are pollinated by insects such as bees and flies. Birds eat the fruit and disperse the seeds. The wood of "B. crassifolia" is termite-resistant, making it suitable for outdoor construction, furniture, and turnery. The nanche tree provides food for animals such as peccaries, tapirs, and rodents that play an important role in seed dispersal. Some types of rainforest vegetation can be maintained by the grazing habits of these animals. Nanche fruit is also an important food source for many species of birds, including the yellow-bellied elaenia ("Elaenia flavogaster"), rufous-throated h Hezbollah ("Heteroxolmis rufigula") and golden-crowned warbler ("Basileuterus culicivorus").