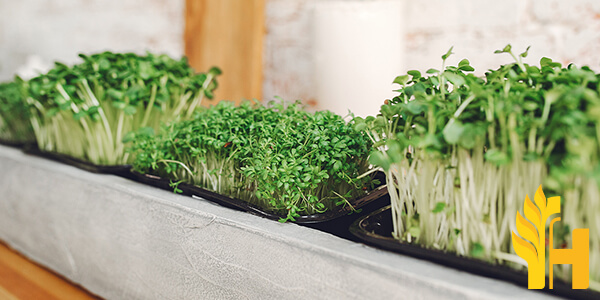 Where to buy and sell Microgreens, lowest (cheapest) and highest price.

The Current commodity price of Microgreens per kg, pound in the world in the global markets

Microgreens are young vegetable greens that are 3 inches (7.5 cm) tall. They have a flavor and nutrient content and come in a variety of colors and textures. Microgreens are considered baby plants, falling somewhere between a sprout and baby green. Microgreens are typically used in salads. They also may be steamed or sautéed. The history of the earliest cultivation of microgreens dates back to ancient times when Mesopotamians and Mediterranean civilizations grew these young greens for their flavor and medical properties. In the 1960s farmers in Japan started growing microgreens commercially, and they became common in Europe and the United States by the 1990s. Today, they are very popular among chefs who use them to add color, texture, and nutrients while highlighting a wide variety of dishes. The growth of the microgreen industry has been helped by these chefs and their use of microgreens in their recipes. A salad composed of five different types of microgreens was served at a gala in New York City in 2012 where a seven-course meal cost $1,000 per person to eat. The harvest of microgreens falls into two categories: cut and come again or continuous. The first requires the harvesting of individual plants when they reach a certain height; this typically happens in about 10 days (which is faster than most other greens). After cutting, several well-established leaves remain and allow for further growth. The second method involves growing plants until they are nearly mature and harvesting the entire crop. This is often done daily or every other day. The plants can be cut at any height before they begin to flower. Microgreens are very healthy for you because of their high nutrient content. Many people grow them simply for health benefits, not just for flavor or appearance. They can be eaten raw or cooked. The nutrients in microgreens are concentrated because they are harvested so early in their growth before the plant has begun to use its stored water and grow big. The longer a plant stays in the ground, the more diluted its nutritional content becomes as it develops larger leaves and roots. This is why you will typically find more nutrients in microgreens than in mature plants. They are also typically very low in calories and high in fiber, protein, essential amino acids, beta carotene, vitamins A and C, calcium, iron, potassium, zinc, copper, manganese, and magnesium. The taste varies depending on the soil it is grown in.

Microgreens are a type of vegetable that are harvested when they are still young and tender. They come in a variety of colors, shapes, and sizes, and can be used in both cooked and raw dishes. Despite their small size, microgreens pack a big punch when it comes to nutrition. They are loaded with vitamins, minerals, and antioxidants, and have been linked to a number of health benefits, including improved digestion, reduced inflammation, and better blood sugar control. Microgreens are grown all over the world and are widely available in most supermarkets. However, if you want to get the freshest and most nutritious greens possible, it's best to grow them yourself. The global production of microgreens is on the rise, with farmers in many countries now cultivating these nutritious greens. In the United States, microgreens are typically produced in a greenhouse or controlled-environment agriculture (CEA) systems. However, some farmers are beginning to grow microgreens outdoors in fields and high tunnels. Microgreens are usually harvested 7-14 days after seeding when they are 2-3 inches tall. The most popular microgreens include arugula, beet greens, radish greens, and mustard greens. These greens can be eaten raw in salads or sandwiches or cooked in a variety of dishes. Microgreens are a nutritious addition to any diet and are a great way to get your daily recommended servings of fruits and vegetables.