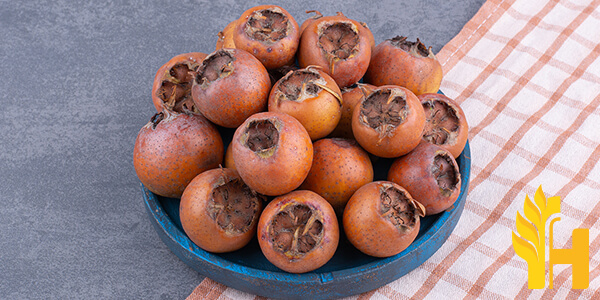 Where to buy and sell Medlar, lowest (cheapest) and highest price.

The Current commodity price of Medlar per kg, pound in the world in the global markets

The common medlar ( M. germanica ) is a small, much-branched, deciduous, spinous tree known for its edible fruits. These are available in autumn and winter after the tree has lost its leaves and they resemble a wrinkled yellowish-brown pear. The fruit of the common medlar is subglobose to oblong, 4–8 cm long, and 4–8 cm broad. The skin has a rough surface, similar to that of the related loquat. The flowers are white or pink-tinged, with five petals, and produce a brown globular fruit with leafy persistent sepals. The fruit is not fit to eat immediately after picking. The fruit matures, however, in autumn or early winter; it is too tart and astringent until then. When ready for consumption, the mesocarp is translucent and jelly-like, with a rose-colored tinge; the aroma of its slightly gritty inner flesh is vaguely apple-like (which can be misleading when one first tries it — not apple, but a rose hip -like the taste). The fruit contains large brown seeds, about 1 cm in diameter, that resemble coffee beans. The fruit can be used in many ways. To ripen the fruit it's best to leave them at room temperature for a few days until they are soft enough, so you can cut them open and scoop out the flesh which is now brown and mushy. The flavor of ripe medlars is unusual but very enjoyable, with hints of date and banana. Medlars can be used to replace ingredients in recipes that call for apples or pears. They can be eaten raw and make a great filling for pies and crumbles with apple and pear, too. The seeds will soften if left in the fruit overnight. The fruit is not fit to eat immediately after picking. The flesh quickly turns brown and mushy, but the skin (which becomes very hard) remains intact for some time. At first, because of its unripe smell, it's as if you wouldn't even want to try this fruit, but as soon as your taste buds give in the flavor will be the most unforgettable experience.

Medlar is a fruit tree that is native to Asia, Europe, and North Africa. The tree grows to a height of 15-20 m and produces small, brown fruits. The fruits have a sour taste and are used in various culinary dishes. Medlar is also known for its medicinal properties and has been used in traditional medicine for centuries. The global production of medlar is estimated to be around 100,000 metric tons per year. The majority of medlar fruits are grown in China, followed by India, Pakistan, and Turkey. Other countries that produce medlar include Iran, Iraq, and Afghanistan. Medlar is a popular fruit in many Asian countries and is used in a variety of dishes. It is often used in curries and stews, as well as in desserts and jams. The fruit can also be eaten fresh or dried. Medlar has a number of health benefits due to its high content of vitamins and minerals. The fruit is rich in vitamin C, which helps to boost the immune system. Medlar is also a good source of dietary fiber, which helps to regulate digestion. Additionally, the fruit contains a compound known as quercetin, which has anti-inflammatory properties. The global demand for medlar is expected to continue to grow in the coming years due to its health benefits and culinary applications. The fruit is likely to see increased demand from the Asia-Pacific region, as well as from North America and Europe.