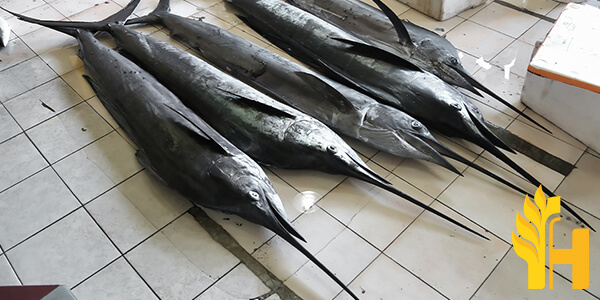 Where to buy and sell Marlin, lowest (cheapest) and highest price.

The Current commodity price of Marlin per kg, pound in the world in the global markets

Marlin is a group of several species of marine fish characterized by their long noses. The species belong to the Istiophoridae family and the family belongs to the Perciformes order. All of them share several features that are common for them: they have an elongated body, a rounder spear from the snout, and a quite long dorsal fin.

Those fish species do not live in one certain habitat, they are wanderers. The fish can be found all over the world near the sea surface. All marlin species are carnivorous and their diet mostly consists of other fishes. They are an important food source and take a special place in sport fishing, where they are highly prized by sport anglers.

Some species belonging to this group have their own names. Four of them are the most accepted as valid: the black, white, striped, and blue marlins. The blue one known scientifically as Makaira nigricans is one of the largest species, it can reach up to 450 kg in weight and it was believed that some of them may weigh even more. It is characterized by its blueish skin shade and silvery belly. It sometimes got visible lighter, vertical stripes. The black variety is scientifically known and Istiompax indica it reaches a similar size to the blue variety but the largest known fish of this group was roughly 700 kg in weight. It is native to the Indo-Pacific areas and usually is blue-grey or dark blue. The striped marlin, also known as Kajikia audax, is another species native to the Indo-Pacific area. It is a bit smaller and commonly reaches up to 125 kg. The white variety is native to the Atlantic. It is blue-green with a distinguished pale belly and has several white stripes on its sides. This variety does not reach more than 45 kg in weight.

The fish is not currently endangered, but it is a well-known source of food in many areas the fish naturally occurs. The fact of excessive fishing bothers some conservationists which are worried that the fish is unsustainably fished, particularly in the Atlantic. The fish is also commonly known as a holy grail for sport fishers. Its meat is considered a delicacy, especially in Asia where it is served in many traditional dishes, like, for example, the Japanese sashimi.

According to the Food and Agriculture Organization of the United Nations (FAO), the global production of marlin fish in 2016 was 128,626 tonnes. The vast majority of this total came from commercial fisheries, with only a small amount coming from aquaculture. The top five countries in terms of marlin fish production were Mexico (42,841 tonnes), Japan (19,299 tonnes), South Korea (9,003 tonnes), Taiwan (8,230 tonnes), and the United States (4,898 tonnes). Marlin fish are highly prized by both commercial and recreational fishermen, and as a result, they are one of the most heavily targeted fish species in the world. However, their populations have declined sharply in recent years due to overfishing. In order to protect these fish, many countries have introduced catch limits and other regulations. Despite these conservation efforts, the future of marlin fish is still uncertain. Their populations continue to decline in many parts of the world, and it is unclear whether they will be able to recover.