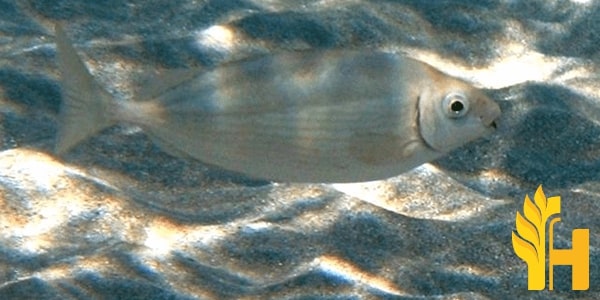 Where to buy and sell Marbled Spinefoot, lowest (cheapest) and highest price.

Siganus rivulatus is known as "surparo" or "sodara" ("Σουδαρά"). This species is an important food fish in Italy and Greece, where it is widely eaten. It was first described by Cuvier as Siganus rivulatus. Fish of the genus Siganus are a common food fish in southern Italy and fundamental to the economy of the Sicilian town of Sciacca. Siganus rivulatus is a small to medium-sized ray-finned fish growing up to 10 cm in length. It has an elongate, laterally compressed body with a bicoloured dorsal fin consisting of a dark grey anterior lobe and an orange posterior lobe, which are separated by a white band. At night, Siganus rivulatus can change their colour to a cryptic one consisting of many dark and light spots. The sides are covered with irregular brown-black stripes and the belly is white. The marbled spinefoot lives in coastal waters at depths between 0 and 100 m, but may sometimes be found up to 200 m. It is a gregarious species and lives in small groups sheltering under rocks, reefs and wrecks. It feeds on algae and invertebrates such as molluscs, crabs and brittle stars. Siganus rivulatus is oviparous with planktonic eggs which hatch into pelagic larvae. Siganus rivulatus was first described in 1792 by the French zoologist, Georges Cuvier, as Siganus rivulatus. It has a complicated taxonomic history with numerous synonyms and is a type species of the genus Siganus. The valid scientific name for this species is now Siganus rivulatus. After being imported to the Mediterranean in the 1970s it has become established off Israel, Lebanon and Cyprus. It was first recorded from Greece in 1983 when it spread rapidly along the coasts of Crete, Peloponnese and western Aegean Sea. The Marbled spinefoot is an important food fish in southern Italy and Greece. It is widely eaten and commercially fished in these areas, where it is considered a delicacy. A fish market survey in the southern Italian town of Reggio Calabria recorded this species as the second most frequently landed fish (after gilt-head sea bream). The total catch was 175 t in 1997 with an average price of €9.7 per kg. Siganus rivulatus is an important species in some artisanal fisheries of Greece and Cyprus where it is mostly fished using traps, spears and line gear. In Cyprus this fish is called "koutsavakas". It has been the second most important catch in the trawl fishery after European hake in the southern and eastern part of Cyprus. There it is mostly caught between December and March during which time the water temperature in the region is 12-14°C and in deeper areas, usually off rocky coasts. Its natural range encompasses the western Indian Ocean and the Red Sea from where it colonised the Mediterranean Sea by Lessepsian migration through the Suez Canal. It is the type species of the genus Siganus.

The marbled spinefoot is a species of ray-finned fish in the family Acanthuridae. It is found in marine, brackish, and freshwater habitats in the Indo-Pacific region. It is an important food fish and is also kept in aquaculture. The marbled spinefoot is a laterally compressed fish with a deeply forked tail. The body is covered in small, sharp scales. The dorsal fin has eight to 10 spines and 20 to 22 soft rays, while the anal fin has three spines and 18 to 20 soft rays. This species grows to a maximum length of 60 cm (24 in). The marbled spinefoot is found in marine, brackish, and freshwater habitats throughout the Indo-Pacific region. It typically occurs in depths of 1–30 m (3.3–98.4 ft), but has been recorded from depths of up to 100 m (330 ft). The marbled spinefoot is an important food fish in many parts of its range. It is often caught using small mesh netting and is also collected for the aquarium trade. This species is also farmed in aquaculture, with farms being located in Thailand, Vietnam, and Indonesia.