Lily Of The Valley price 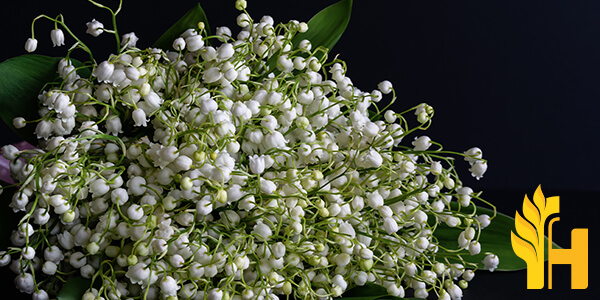 Where to buy and sell Lily Of The Valley, lowest (cheapest) and highest price.

Lily Of The Valley flowers

Lily of the valley, also known botanically as Convallaria majalis, is a perennial herbal that is characterized by its sweet fragrance. It is the only species in the Convallaria genus. The genus belongs to the Asparagaceae family. Lily of the valley is native to eastern North America and Euroasia. It is cultivated for its ornamental purposes, mostly in shaded garden areas in the temperate climate regions of the world. The plant tends to grow closely together forming a type of dense mat, that is why the lily of the valley is sometimes used to cover the ground.

The plant's main characteristic feature is the nodding petite white flowers that resemble little bells. The flowers are born in loose clusters on one side of the leafless stem. The plant usually has only two dark green glossy leaves at the base of the plant’s stem. The flowers turn into red fruits that resemble a berry. All plants parts contain poisonous cardiac glycosides and cannot be consumed by pets, humans as well as other animals. The plant spreads vegetatively both by stolons that creep below the ground and by rhizomes.

In many parts of the world, the plant is not only used for its ornamental purposes but also it is used in many religious celebrations and rituals. The flower is strongly associated with spring and rebirth. The scientific name Convallaria majalis translates as that which belongs to may, making the flower recognized as a May flower. The flower was used in Germanic mythology to describe the purity and humility of the goddess Ostara. Later the flower was associated by early Christians and turned into the flower that symbolize the second coming of Christ. It has been enumerated numerous times in the Bible.

The flower can be found growing in wild, especially in shady grooves and forests as well as valleys and shady meadows. It is often cultivated for its ornamental purposes in gardens and landscapes. Sometimes lily of the valley is sold as cut flowers and used as an ornament in many events such as weddings, birthdays, and many other kinds of celebrations.

Global lily of the valley production

The lily of the valley is a popular plant that is known for its beautiful white flowers. This plant is native to Europe and Asia and has been introduced to North America. The lily of the valley is grown commercially for its flowers, which are used in a variety of settings including weddings, funerals, and as decoration in homes and offices. The plant is also grown for its bulbs, which are used to make a variety of medicines. As of 2018, the global production of lilies of the valley was estimated at 2,000 metric tons. The majority of this production takes place in Asia, with China accounting for the lion's share at 1,500 metric tons. Other significant producers include Japan (300 metric tons) and South Korea (200 metric tons). Lily of the valley is a highly sought-after ornamental plant, with its dainty white flowers and sweet fragrance making it a popular choice for gardens and floral arrangements. The plant is also used in traditional medicine, with its purported health benefits including the treatment of heart conditions and nervous disorders. Looking forward, the global lily of the valley market is expected to continue its moderate growth during the next decade. Rising consumer awareness of the plant's decorative and medicinal properties is expected to drive demand, while continued growth in Asia's economies is likely to support production levels.