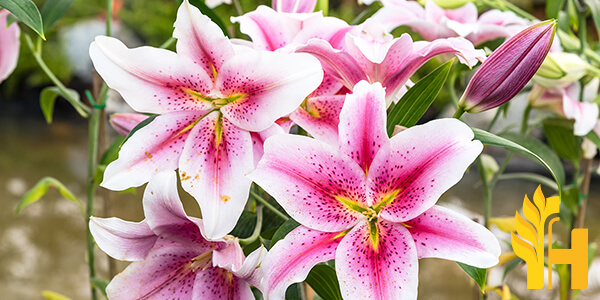 Where to buy and sell Lily, lowest (cheapest) and highest price.

The Current commodity price of Lily per kg, pound in the world in the global markets

Lily is a group of plants that belongs to the genus Lilium. It consists of up to 100 species of flowering herbaceous plants that belong to the Liliaceae family. Lily is native to the temperate regions of the Northern Hemisphere. It is valued for its ornamental purposes, and the plant has been extensively hybridized in order to achieve new, ornamental species.

Lily also may refer to many common names of plants that are similar to the true lilies. For example, the daylily belongs to the Amaryllidaceae family. The true lily is a high perennial plant characterized by its leafy, erected stems, usually narrow, long leaves, scaly bulbs, and single, solitary, or clustered flowers. The flowers are usually made of six petals which are arranged in a circle, creating a trumpet-like shape, Some species produce flowers with curved petals that create a turban-like shape or are loosely connected and strongly reflexed, creating an open cup shape. The flowers of most true lily varieties are well known for their strong aroma. Lilies produce flowers in a vast selection of colors and patterns. The plants reach up to 120 cm in height, but some exotic species may reach up to 2.5 cm in height.

True lilies are usually grown from bulbs but some varieties may be planted from seeds. Their cultivation requirements may differ depending on the species. Some require more sunlight than other. Most of them prefer loamy soil with food drainage. They mostly bloom from July to August, but some species may start producing flowers in late spring or early autumn.

Undeniably true lilies are one of the oldest plants to be cultivated. It was used not only for its ornamental purposes but also for its medicinal purposes or even as a source of food. It was cultivated by the Greeks and Romans as ornamental and healing plants. In the Middle Ages, lily was strongly associated with Virgin Mary and symbolized purity. In East Asia, true lilies were cultivated as a source of food as well as ornamental plants. Nowadays the largest production of lilies both the bulbs and cut flowers takes place in China and the Netherlands, where lilies are produced, bred, and propagated. They are quite significant flowers for the international flower industry.

Lilies are one of the most popular flowers in the world, and their production is widespread. The largest producers of lilies are China, Japan, and South America. In China, lily flower production takes place in the provinces of Zhejiang, Fujian, and Hunan. These three provinces accounted for about 70% of China's total lily flower production in 2016. The main lily varieties grown in China are Asiatic lilies, oriental lilies, and trumpet lilies. Japan is another major producer of lilies, with the majority of production taking place in the prefectures of Hokkaido, Aomori, Iwate, and Miyagi. Japanese lily growers produce mainly Asiatic lilies and trumpet lilies. South America is another major global producer of lilies, with Brazil, Argentina, and Colombia being the main exporters. The main varieties of lilies grown in South America are Asiatic lilies and oriental lilies. The global lily flower market is expected to continue growing in the coming years, driven by rising demand from countries such as China and Japan.