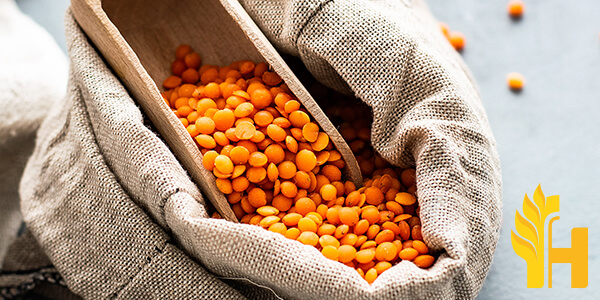 Where to buy and sell Lentil, lowest (cheapest) and highest price.

The Current commodity price of Lentil per kg, pound in the world in the global markets

Lentil is a small annual legume plant that belongs to the Fabaceae family. It is mostly cultivated for its edible seed. It is commonly cultivated in Europe, Asia, and North Africa but it is not a well-known crop in the Western Hemisphere. The seeds are used mostly as a source of food and are used to prepare many kinds of dishes such as soups, stews, or side dishes. Lentil is also used as fodder in some places around the world. It is an excellent source of dietary fiber, vitamin B, iron, phosphorus, and protein. Lentil is a plant that reaches up to 45 cm in height. It creates many ascending branches. The plant produces compound alternative leave, with up to six pairs of oblong leaflets that are up to 15 mm long and end in the spine. From June or early July, the plant produces up to four pale blue or purple flowers that are located in the axils of the leaves. The small pods are oblong and inflated. They contain up to two seeds which are up to 6 mm in diameter. Lentil is available in many varieties which differ from each other by the size, color of the leaves, flowers, or seeds. The seeds are usually available in yellow, white, green, gray, brown, or even black colors. The seeds can sometimes be speckled or mottled. It is one of the most ancient sources of food cultivated by humans, Most probably it was cultivated in Near East. Its ancient seeds were found in the lake dwellings in Switzerland. They are dated back to the Bronze Age. They are widely cultivated in the Middle East, North Africa, and in Europe along the Mediterranean region, in Germany, the Netherlands, and France. The largest production of lentils takes place in Egypt and Syria, as well as other Middle Eastern countries. Lentils are an excellent source of protein. They contain more than 25% protein in their total value what makes them an excellent meat alternative. They are also a rich source of various vitamins such as vitamin B and folate. Lentils also contain various important compounds and minerals: iron, magnesium, phosphorus, potassium, zinc, potassium, and manganese. They are also high in dietary fiber, which improves the digestion tract and the growth of healthy gut bacteria.

Lentils are an important food crop, with a global production of more than 3 million tonnes each year. The majority of lentil production takes place in South Asia, where the crop is an important part of the diet. India and Pakistan are the leading producers of lentils, followed by Canada and Turkey. The top lentil-producing countries in the world are India, Canada, and Turkey. Together, these three nations account for over 80% of the world's total lentil production. Lentils are a versatile crop and can be used in a variety of dishes. They are often used as a replacement for meat, as they are a good source of protein. Lentils can also be used in soups, stews, and salads. Lentils are nutritious food and are a good source of fiber, iron, and folate. They are also low in calories and fat. Lentils are a good choice for people who are looking for healthy, hearty, and economical food.