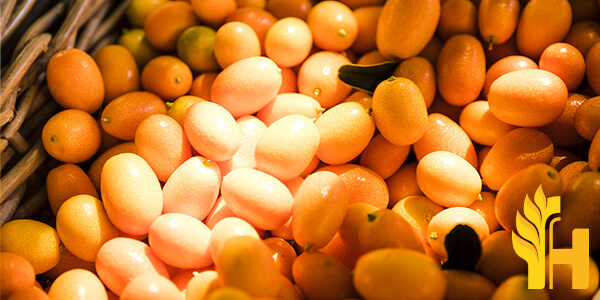 Where to buy and sell Kumquat, lowest (cheapest) and highest price.

The Current commodity price of Kumquat per kg, pound in the world in the global markets

Kumquat is a genus of evergreen trees or shrubs that belongs to the Rutaceae family. It is commonly cultivated for the orange fruits it creates. Kumquat is native to eastern Asia, but the small tree is cultivated in all the regions of the subtropical climate.

The fruit most often is eaten fresh or used to make various kinds of preserves such as jams and jellies. They are also commonly candied especially in China, where it is a common sweet treat. In some regions of the United States, kumquat tree branches are used as Christmas decorations.

Kumquat is a plant that reaches up to 3.6 meters in height. It creates mainly thornless branches. It has characteristic foliage made of dark green, shiny leaves. The plant produces small clusters of white flowers clustered in the leaf axils. The flowers turn into orange-yellow fruits that are oval or round. The fruits reach up to 2.5 cm in diameter. The fruits are covered with soft, edible, pulpy skin. Their flesh is mildly acidy, sweet, and very juicy.

The commonly cultivated variety of this fruit is the Fortunella margarita also known as Nagami. It is native to China and characterized by yellow oval fruits that reach up to 3 cm in diameter. Another quite popular variety is Fortunella japonica, which, as the name suggests, is native to Japan. It produces small, round fruits that reach up to 2.5 cm in diameter. They are usually orange in color. The sweetest variety of kumquat is the Fortunella crassifolia. It is the most often cultivated variety of kumquat sold to consume fresh. Some hybrids have been also produced, especially in the United States. Kumquats were combined with limes, oranges, and many other citrus fruits in order to improve their overall taste and quality.

Kumquats are predominantly produced in China and the Philippines. They are consumed fresh as a whole with the skin or in a form of a sweet snack as candied fruits. They are also cultivated in North America, Africa, and the Greek island of Corfu. On a small scale, Kumquats are produced in France, especially the Toulon region. In colder months they are produced in Spain and occupy a prominent position in the french island l'île de La Réunion.