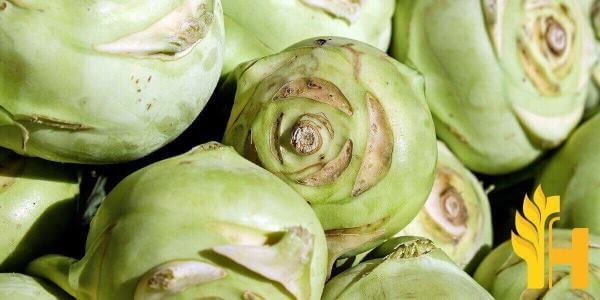 Where to buy and sell Kohlrabi, lowest (cheapest) and highest price.

The Current commodity price of Kohlrabi per kg, pound in the world in the global markets

Kohlrabi does not occur in the wild. It is an exclusively cultivated (two-year-old) plant derived from the cabbage family, i.e. the same plant family that includes, broccoli, cauliflower, kale, and Brussels sprouts. It derives from feed cabbage. In Ancient Rome, it was known as Pompeian cabbage. It was introduced to the Polish market in the 19th century. There are two known variants of this vegetable – the green one and the red one. Both of them are characterized by their bright flesh.

Kohlrabi is not a popular vegetable in Poland, even though it is not a demanding plant. It is similar in cultivation needs to the cabbage. It prefers permeable, moderately moist, neutral, or slightly acidic, rich in humus ground. It grows well in full sun. It has high thermal requirements, therefore it is grown only from seedlings, in our climate as an annual plant. It also requires regular weeding and watering.

This vegetable in terms of taste is similar to cabbage, but with a stronger, more harsh aftertaste similar to radish or turnip. Kohlrabi has the best taste when it is small yet heavy. It is characterized by its crunch and spicy taste. Big and light pieces tend to be spongy, watery, and fibrous. Kohlrabi is usually eaten raw, in slices, or shredded as a salad ingredient. It can also be cooked, steamed, baked, or used as a soup ingredient.

In terms of edibility, not only the root is edible but also its leaves, which are often thrown away. Kohlrabi's leaves are rich in nutrients. They can be chopped and used as salad ingredients. They are rich in iron and are recommended for pregnant women.

Kohlrabi, just like other cabbages, has strong anti-cancer properties thanks to the high amount of glucosinolates - sulfur compounds. Eaten regularly, they reduce cancer possibility or even inhibit the development of cancer cells. These substances have also bactericidal and fungicidal properties, thanks to which they protect against the multiplication of microorganisms causing ulcers in the digestive tract.

The raw plant is rich in lutein - a substance needed for the proper functioning of the organ of vision and protection against dangerous solar radiation (UVA and UVB). Kohlrabi is great for people who take care of their shape. It is low in calories, and at the same time, it contains fiber, which cleanses the body and at the same time gives a feeling of fullness. The vegetable is also a rich source of vitamin C, folic acid, and other B vitamins, potassium, phosphorus, calcium, magnesium.

Nutritional and healing properties:
1. It is rich in vitamin C. 200g of Kohlrabi flesh contains 100% of a daily dose of that vitamin.
2. It has a beneficial effect on the eyes and sight thanks to the high amount of lutein. This substance is essential for the condition of our eyes.
3. Kohlrabi leaves are rich in iron. People struggling with anemia caused by a deficiency of this element should include it in their diet.
4. It is recommended for people who take care of their diet and shape. It is low in calories and makes a perfect healthy snack. It is rich in fiber. Kohlrabi is also recommended for people suffering from diabetics because it raises blood sugar very slowly.
5. Kohlrabi leaves are rich in chlorophyll. This compound supports the work of the liver while removing toxins from the body, and regulates the work of the intestines.
6. It contains potassium, which is responsible for maintaining fluid balance in the body, proper muscle function, and metabolism. Kohlrabi should be avoided by people suffering from kidney stones due to the presence of oxalates in its composition. Due to its irritating properties, it should not be consumed in case of gastritis.

This plant, due to its quite simple cultivation is produced all over the world. The biggest producers of kohlrabi with the highest productions volumes are China (33.5 million tons), India (9.1 million tons), Russia (2.6 million tons) in 2019. Poland was established as the 10th largest kohlrabi producer with a production quantity of 899 100 tons. The vegetable is quite popular in Hungary where it is usually eaten like asparagus. Kohlrabi is also very popular in Germany.

Kohlrabi is a popular vegetable in many parts of the world, and its production is growing rapidly. In 2013, global production of kohlrabi was estimated at 1.7 million metric tons, an increase of nearly 50% from 2012 levels. The majority of kohlrabi production takes place in Asia, with China accounting for the largest share. Other major producing countries include India, Bangladesh, and Pakistan. Kohlrabi is a brassica vegetable, belonging to the same family as cabbage, broccoli, and cauliflower. It is characterized by its thick, bulbous stem, which can be eaten raw or cooked. Kohlrabi leaves are also edible and are often used as a leafy green in salads or cooked as greens. The vegetable is low in calories and fat and is a good source of vitamins C and B6, potassium, and fiber. The increasing popularity of kohlrabi has led to higher demand for vegetables, both from consumers and retailers. This has resulted in higher prices for kohlrabi, especially in markets where the vegetable is not widely produced. In order to meet this growing demand, farmers in different parts of the world are increasing their kohlrabi production.