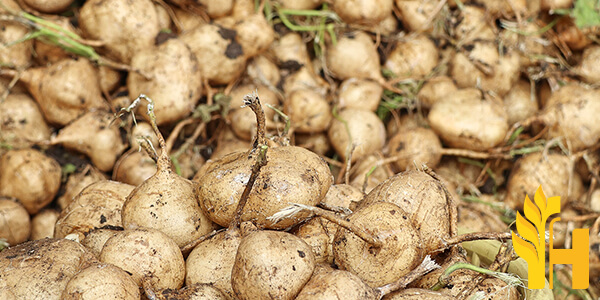 Where to buy and sell Jicama, lowest (cheapest) and highest price.

The Current commodity price of Jicama per kg, pound in the world in the global markets

Jicama is a root vegetable with thick, brown skin. It's white inside and tastes like an apple but not as sweet. It's a bit like a potato but with a lot fewer carbs. The jicama plant grows mostly in Mexico and Central America on a long vine. But the part you eat is the root. Jicama is low in calories and gives you a lot of fiber. It's one of the best sources of soluble fiber out there. Soluble fiber turns into a gel-like substance in your digestive system and slows down digestion, which makes you feel full for longer and helps to regulate blood sugar. It also helps lower cholesterol and controls diarrhea. A cup of jicama contains only about 130 to 140 calories. That's not bad, considering that a medium-sized baked potato contains well over 200 calories. Since jicama has almost no fat, it is also a good source of vitamin C and fiber, with 4 grams each per serving. Jicama can be used as a substitute for raw potatoes, boiled and served with butter. It can also be used in salads or slaws or eaten alone as a snack. In addition to being low in calories, jicama is very low in carbohydrates. Jicama contains significant amounts of phytonutrients called saponins, chemicals that have effects on the body similar to those of certain prescription drugs. The overall effect is protective, but researchers do not yet know which specific conditions jicama may help prevent or relieve. Saponins work by triggering "phase 2 detoxification." This means they can protect against genetic damage from toxic substances, decrease inflammation and also increase the urinary excretion of some carcinogens. As with any fruit or vegetable, it is best to eat jicama fresh and raw. Jicama can be stored in the refrigerator for up to two weeks. It should be allowed to ripen at room temperature until the wrinkles on its skin become pronounced and it feels slightly soft when pressed. After ripening, it can be wrapped in plastic and stored in the refrigerator. It doesn't have to be cooked. Some people eat it raw, out of the bag as a snack. You can also grate or shred jicama and use it as you would any root vegetable in coleslaw, soups, or stews. Before using it in a recipe, rinse the jicama well and peel off the thick, brown skin. The jicama will keep in the refrigerator for up to a week. As with other root vegetables, jicama is high in carbohydrates and should be eaten in moderation by people with diabetes. Jicama is also known as: Mexican potato, Mexican turnip, cachanga, mandacoca, chicharronera, chayote squash, ivy gourd and saa got (Thai).

Jicama (Pachyrhizus erosus) is a widespread root vegetable in the tropics and subtropics. The flesh of the jicama root is crunchy and has a sweet, nutty flavor. Jicama is an excellent source of dietary fiber and vitamin C. Jicama is native to Mexico, where it has been cultivated for centuries. Today, jicama is grown in many tropical and subtropical countries around the world. The largest producers of jicama include China, Thailand, Vietnam, and Indonesia. In 2017, global production of jicama was estimated at 4.3 million metric tons. China is by far the largest producer of jicama, accounting for more than 70% of total production. Other leading producers include Thailand, Vietnam, and Indonesia. The vast majority of jicama that is grown is consumed locally. However, jicama is also exported to other countries in Asia, Europe, and North America. Jicama is typically sold in supermarkets as whole roots or in pre-packaged, peeled, and sliced form. Jicama is a versatile ingredient that can be used in both sweet and savory dishes. It is often eaten raw, in salads, or as a healthy snack. Jicama can also be cooked, roasted, or stir-fried.