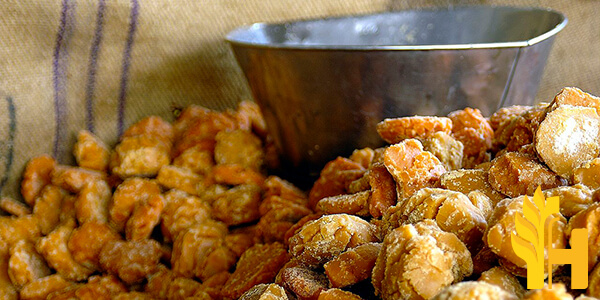 Where to buy and sell Jaggery, lowest (cheapest) and highest price.

The Current commodity price of Jaggery per kg, pound in the world in the global markets

Jaggery, also known as gur or non-centrifugal sugar, is a type of natural product made of sugarcane. It is similar to sugar but occurs in a more unrefined form. It appears in a form of a raw brown mass of sucrose. The brown color is a result of other elements found in concentration, such as wood, ash, and bagasse. It is commonly made from sugar and date palm trees. The process of making jaggery is easier than making sugar, and the product itself is way healthier than refined sugar.

It is mainly produced as an ingredient of sweet items but it is also consumed raw. Gur is also used in Ayurveda medicine recipes and in alcohol drinks-making such as palm wine. It is also an important product for the industrial production of chocolates, toffees, chewing gums, and many more sweets and candies. Gur is also used as a natural way of dying fabrics and when mixed with buttermilk and mustard oil used to season the inside of tandoor ovens. It is especially popular in Caribbean Islands, North Africa, Latin America, and southeast Asia, but the varieties of jaggery may differ as other ingredients are used in the process of making it.

The largest production of jaggery takes place in India where over 60% of the total global production takes place. Brazil is the largest exporter of gur. Other significant countries specialized in gur production are Malaysia, Japan, the USA, China, and Indonesia. India uses the most conventional methods to produce jaggery, as most of the manufacturing units are located in rural regions.

The largest number of jaggery manufacturing units is located in the Kushinagar district of Uttar Pradesh. The major producers in India are Maharashtra, Karnataka, Tamil Nadu, and UP. Although the production of jaggery is not very expensive, its storage is concerning. Gur is commonly used as a sweetener in India and it's often a substitute for sugar in rural India.

The overall price of jaggery depends on the price of sugarcane and many other factors such as government policies, demand, and supply.