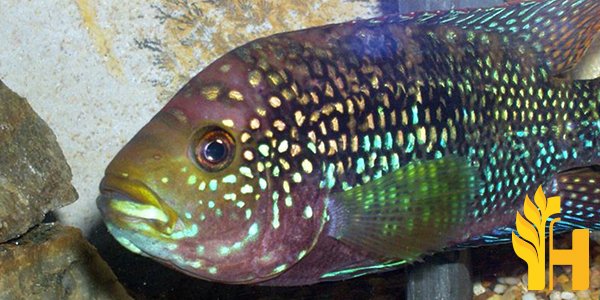 Where to buy and sell Jack Dempsey, lowest (cheapest) and highest price.

The Jack Dempsey (Rocio octofasciata) is a species of cichlid fish that is native to freshwater habitats from southern Mexico to Honduras but also introduced elsewhere. Its common name refers to its aggressive nature and strong facial features likened to that of the famous 1920s boxer Jack Dempsey. The Jack Dempsey is a cichlid that typically grows to about 12 in (30 cm) and can weigh up to 5 lbs (2.3kg). It has an oval-shaped body with the dorsal fin starting just behind the head and running almost the entire length of the back, ending at the base of the tail. Though there are some physical variations throughout their wide geographic range, the most obvious identifier is a distinct dark spot on the caudal fin of mature individuals; no other cichlid has such a mark. The Jack Dempsey lives in many types of habitats, from slow-moving rivers and streams to still waters and swamps. These fish are extremely aggressive and territorial. Attacks on divers have occasionally been recorded, although they are mostly bluff. The Jack Dempsey occurs in Honduras, Nicaragua, Costa Rica, Guatemala, Belize, Mexico (Campeche), and the United States (Florida). It has also been reported in Colombia but is likely to be a recent introduction there. This species has been widely introduced outside its native range, with feral populations established in Florida, Hawaii, Mauritius, and elsewhere. The Jack Dempsey is an omnivore that will eat most foods including worms, crustaceans, and insects. They are also known to occasionally prey on young turtles, snakes, and frogs. Other cichlids, such as peacocks and angelfish, can make good tank mates. The Jack Dempsey cichlid lays its eggs in flat rocks or other hard surfaces where the parents can protect them from being eaten by other fish. Females typically lay approximately 100-300 eggs at a time which often hatch within 24 hours of being laid. The Jack Dempsey is extremely aggressive and should not be housed with other fish unless it is a mated pair of the same species, especially if there is fry present. Even then, they will eat their fry given the chance. They can be housed in an aquarium that is at least 48 inches long with plenty of rocks and other decors to create caves and crevices. Bogwood, tangles of plastic plants, and other items are also good for creating hiding places. The Jack Dempsey requires an environment with lots of rocks or other decorations so they can claim their territory. They are best kept alone in a species tank.