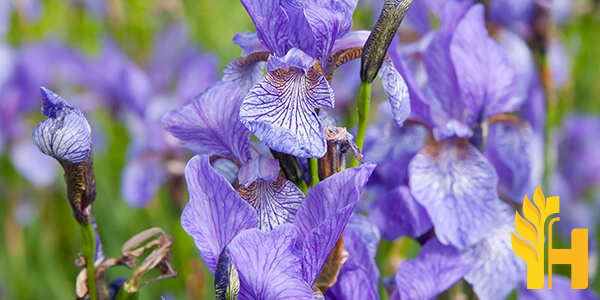 Where to buy and sell Iris, lowest (cheapest) and highest price.

The Current commodity price of Iris per kg, pound in the world in the global markets

Iris is a genus of plants that belongs to the Iridaceae family. The genus consists of about 300 species. It is one of the most popular and varied types of garden flowers. Most species are native to the temperate zone of the northern hemisphere, but its most handsome varieties are native to the Mediterranean region and central Asia. It is believed that iris is the fleur-de-lis, the French royalist standard. Iris is also quite popular in Japan, where it is commonly used in a variety of flower arrangements and the Japanese traditional art of plant arranging known as ikebana. The flower is also the main source of orris root, which is the main source of the „Essence of violet” used in perfumer making.

Iris can be both bulbous and rhizomatous. Rhizomes species produce robust stems which are horizontal and ringed with leaf scars. The stem usually grows exposed but is deeply rooted in the ground. Irises native to southwestern Europe usually grow from bulbs. They produce short, conical stems and form many leaf bases, one inside the other.

The flower is usually built from three petals, and three broad pollen-receptive stigma branches with hidden pollen-producing anthers. The glower is adored for its unique and handsome flowers that are commonly used as an ornament of gardens and landscapes. The best-known variety is the German variety. It is a hybrid of the Iris pallida and Iris variegata as well as other European species. It produced long swordlike leaves and long stems that may reach up to 90 cm in height. Until 1900 it was one of the largest known species, but then even larger hybrids were created, resulting in an an even wider selection of colors and combinations.

Apart from their decorative purposes, Irises are used in the production of cosmetics, medicine, and perfumes. Their essential oils are often used in aromatherapy. Its flowers and orris root are used to add color and flavor to gin. Some varieties of irised may be toxic, the consumption may cause nausea, vomiting, diarrhea, skin irritation but poisoning are not fatal. Yellow irises are also often used in the process of water purification, because they consume nutrient pollutants and as a result improve the quality of water.

Iris is a genus of flowering plants with around 260 species. It takes its name from the Greek word for a rainbow, which is also the name for the Greek goddess of the rainbow, Iris. The flowers of iris plants are characterized by their showy, colorful petals, and many species are popular ornamental plants. Irises are native to temperate climates throughout the world and can be found in a wide range of habitats, from woodlands to mountain meadows. Iris plants are cultivated for their beautiful flowers in many parts of the world. The Netherlands is one of the leading producers of Iris flowers, with Dutch growers exporting large quantities of cut iris blooms to markets around the world. Iris bulbs are also widely traded, and many popular cultivars are available commercially. Iris plants can be propagated by seed, division, or root cuttings. They are generally easy to care for and make excellent garden plants. Irises are also popular as pot plants, and many varieties can be grown successfully indoors. Iris flowers come in a wide range of colors, including white, yellow, pink, purple, and blue. The most popular cultivars are those with large, showy flowers in shades of blue and purple. Iris plants can be climbers or ground-covering plants, depending on the species.