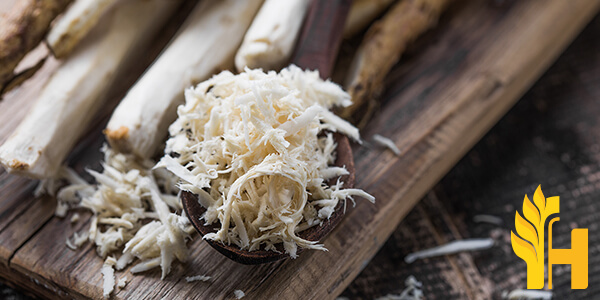 Where to buy and sell Horseradish, lowest (cheapest) and highest price.

The Current commodity price of Horseradish per kg, pound in the world in the global markets

Horseradish is a hardy plant belonging to the Brassicaceae family, also called the mustard family. It is a perennial plant well known for its spicy fleshy root which is often used to prepare a condiment or table relish. The plant is native to the Mediterranean regions but nowadays is cultivated in almost are zones of the temperate climate. Due to its excessive occurrence, it was proclaimed an invasive and troublesome weed in many places, especially those characterized by moist and cool weather.

Horseradish is considered a healing plant especially in traditional medicine and has a vast culinary use. It is often used as a substitute for wasabi in Japanese cuisine. The plant is characterized by its large, glossy leaves which are growing straight from the large, white root. It produces small white petals that consist of four petals. The flowers are borne in axillary or terminal racemes. The flowers turn into small oblong fruits also known as cliques and are slightly tipped by a short persistent style.

The plant is propagated early in spring by being placed in the soil at a single angle with the top part covered 1-2 cm deep. Usually, pieces no larger than a pencil size are used by cultivators. The roots are rubbed off to minimize their branching and crooked formation. They are harvested after a single growing season. The harvested roots are then trimmed, carefully washed, and prepared for sale.

The largest global production of horseradish takes place in the Netherlands. It is also the world’s top exporter of this plant. The Netherlands is followed by Italy, China, Spain, Mexico, and the United States. It is a very common aromatic root vegetable that has vast culinary uses. It has many health benefits. Horseradish helps to reduce inflammation, supports cell damage fight by neutralizing free radicals, and improves the respiratory system. Horseradish is an excellent source of various vitamins and vitamins. It contains magnesium, calcium, potassium, zinc, and folates. It is also a rich source of vitamin C.

Horseradish is a well-known root vegetable that has a sharp, pungent flavor. It is often used as a condiment or spice and can be found in many Asian and European dishes. Horseradish is also known to have medicinal properties and has been used to treat various ailments for centuries. In recent years, horseradish has become a popular ingredient in fish dishes around the world. The sharp flavor of the root vegetable pairs well with the delicate taste of fish, making it a popular choice for many cooks. Horseradish is native to Europe and Asia and has been cultivated for centuries. Today, it is grown in many parts of the world, including the United States, Canada, China, and Japan. The majority of horseradish production takes place in China. In 2016, China produced nearly 80% of the world’s horseradish supply. Other major producers include the United States, Canada, and Japan. Global production of horseradish is difficult to estimate because the plant is not widely cultivated and data is not available from all producing countries. However, based on partial data, it is estimated that global production of horseradish was between 50,000 and 60,000 metric tons in 2013. The majority of horseradish production takes place in Europe, with Germany, Poland, and the United Kingdom being the leading producers. Smaller amounts of horseradish are produced in North America, Asia, and Africa.