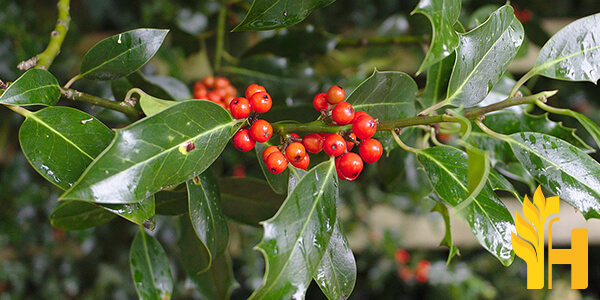 Where to buy and sell Holly, lowest (cheapest) and highest price.

Holly is a general name of a shrub or a tree belonging to the Aquifoliaceae family. It belongs to the Ilex genus which consists of 600 different species distributed all over the world. Some of the species are cultivated commercially for their ornamental purposes. They are characterized by their shiny, dark green foliage and red or dark, almost black, fruits which are a popular Christmas decoration. Another important reason why holly is cultivated is popular in some areas of South America known as Mate. It is made from the leaves of Ilex paraguariensis (yerba mate).

Holly is characterized by its simple leaves with wavy margins. Their spines are tipped. The plant occurs in both varieties as deciduous and evergreen. It produces small flowers which are usually composed of four petals, green in color and unisex. The flowers occur both as single and as clusters. The flowers turn into drupes fruits that are an important source of food for many birds and animals species in winter, however, most of the fruits are not safe for human consumption.

Nowadays the plant is used as a popular Christmas decoration and for its ornamental purposes. English and American holly are especially popular in winter as their leaves are of dark green color which contrasts with the intensive red color of fruits. Leaves of holly are also used to make various kinds of medicines, but fruits are poisonous and must not be consumed. Tea made of holly fruits was used as a heart stimulant by American Indians. Its other species were also used as a remedy for bad cases of vomiting and it was also a ceremonial cleanser in South America. It is commonly used to treat fever, cough, heart diseases, and digestive disorders.

Being native to almost every climate zone in the world, holly is a common slow-growing shrub that naturally occurs in many places all around the world. It is especially popular in Europe and the United States, most importantly in winter, when it is a common Christmas decoration. It is widely cultivated in the northern parts of the United States as well as in Great Britain.

The global production of holly plants is significant, with many growers producing the plant for commercial purposes. In the United States, holly is grown in Florida, Georgia, and South Carolina. Other top producers include Mexico, Brazil, and Bolivia. Holly plants are also grown in Europe, Asia, and Africa. According to the Food and Agriculture Organization of the United Nations (FAO), global production of holly was estimated at 8,810 tonnes in 2016. The majority of holly produced is used for ornamental purposes, with the United States being the leading producer, followed by Brazil, China, and Japan. Holly is a popular plant for use in Christmas decorations, with its glossy evergreen leaves and bright red berries providing a festive touch. In the United States, holly production is centered in North Carolina, which is responsible for around 80 percent of the country's total output. The state is also home to the American Holly Society, which promotes the plant's cultivation and use. While holly is typically associated with Christmas, it is also used in other holidays and celebrations. In China, for example, holly is used in the Spring Festival, while in Japan it is traditionally planted in cemeteries as part of the Obon festival. Holly can also be found in many homes and gardens as a decorative plant.