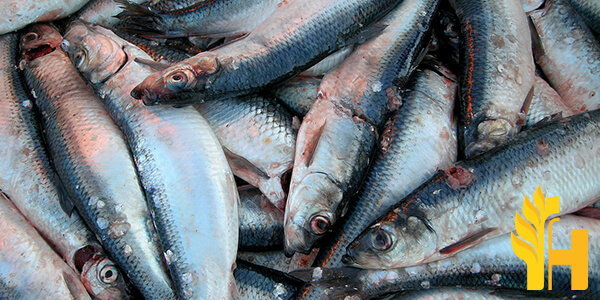 Where to buy and sell Herring, lowest (cheapest) and highest price.

The Current commodity price of Herring per kg, pound in the world in the global markets

Herrings are characterized by their small heads. They are streamlined fish that is covered with beautifully colored scales. They usually occur in silver or silver-grey colors with quite iridescent sides underlined with scales in blue or dark-blue shads. The adult specimen reaches up to 38 centimeters in length. They are one of the largest species of fish in the world. Their diet consists of many types of planktonic crustaceans, fish larvae as well as organisms such as pteropods and copepods.

The fish usually is found in larger groups (schools) in other to avoid larger predators such as salmon, tuna, or cod. It is an extremely important fish for both commercial and sport fishing industries. It is commonly fished with drift nets and surrounding nets. It is a great source of food. Herring is available fresh but also is used to produce various other products. The most popular varieties of this dish available on the market are pickled, salted, cured by smoking, or kippered. Young herrings that are usually caught in eastern Canada and the northeastern United States are canned as sardines. They are also used in the production of various side products such as fish oil and animal feedings.

The meat of this fish is full of important minerals, vitamins, and other healthy compounds. It is an excellent source of vitamin A, D, and b12. It contains minerals such as potassium, selenium, phosphorus as well as sodium. Just like other types of fish, herring is a great source of omega-3 fatty acids as well as healthy proteins and fats.

The top three producers of herring are the Netherlands, Norway, and Russia. Each country generates a yearly income of $193.69M each. The top global exporter is the Netherlands while the largest global importer is Egypt. In 2020 the total value of export was established as $608.43M while import value was $627.33M.

Herring is a small, oily fish that is found in the waters of the North Atlantic and North Pacific oceans. It is an important food fish for humans and animals and is also used in the production of fish oil and other products. Herrings are typically caught using nets or other fishing gear and are then either eaten whole or processed into various food products. The global production of herring is relatively small, totaling just over 1 million tons in 2016. The majority of herring production takes place in Europe, with Norway, the Faroe Islands, and Iceland being the largest producers. Other major herring-producing countries include Canada, Russia, and the United States. Herring is a versatile fish that can be used in a variety of dishes. It can be smoked, pickled, or canned and is often served as an appetizer or main course. Herring is also a popular ingredient in many traditional European dishes such as herring salads, herring pie, and Scandinavian lutefisk.